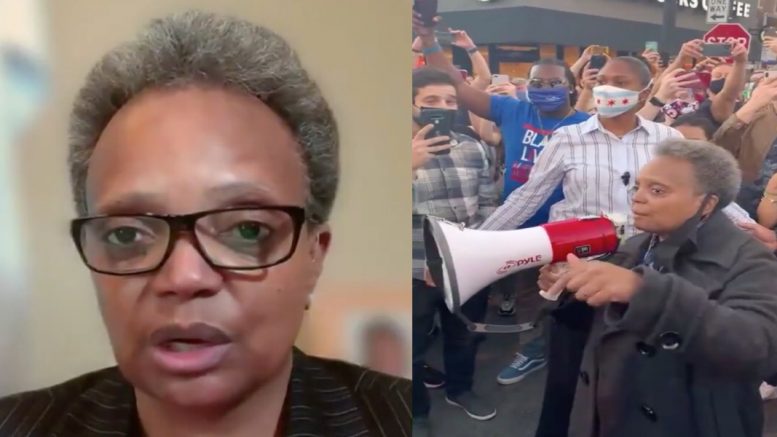 This is a great day for our city and our country. We are taking our democracy back. #BidenHarris2020 pic.twitter.com/OAZQPd1r4y

Following celebrating in the street, Lightfoot announced a 30-day stay-at-home advisory that will take effect Monday.

The advisory calls on all Chicagoans to do the following: “Stay home unless for essential reasons, Stop having guests over — including family members you do not live with; Avoid non-essential travel; Cancel traditional Thanksgiving plans.”

On Friday, however, Lightfoot defended her decision to implement a new round of lockdown orders, just days after she joined large crowds, during an interview on MSNBC.

Asked what does she say to her critics after she “went out and stood before a massive crowd who was celebrating Joe Biden’s victory”, Lightfoot defended her decision by saying that everyone in the “big crowd was wearing masks”.

“You can see the shot here. Mask compliance in our city is actually up very, very high,” Lightfoot said. “But yes, there are times when we actually do need to have relief and come together, and I felt like that was one of those times. That crowd was gathered whether I was there or not.”

“But this has been a super hard year on everyone. Everyone feels traumatized, they feel threatened, their safety and they don’t know what tomorrow is gonna bring. With this new surge in cases, we have just got to step up and do the right thing,” she claimed.

Chicago Mayor @LoriLightfoot defends celebrating with a large crowd when the media called the race for Biden despite her own rules about mass gatherings:

“That crowd was gathered whether I was there or not.”
pic.twitter.com/uq4o4yCoDc