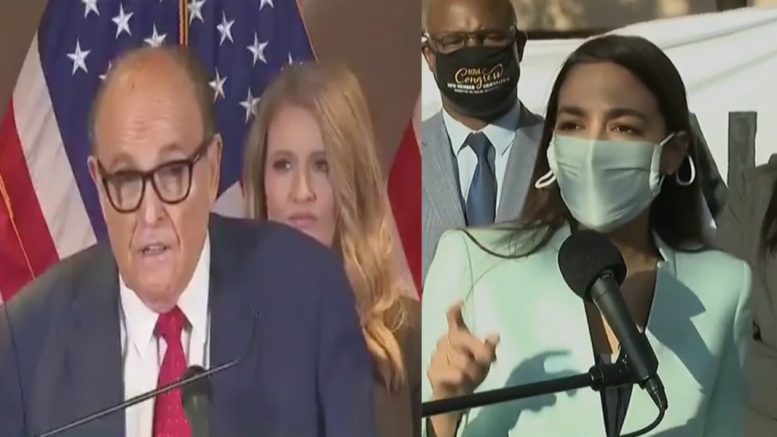 During an explosive news conference Thursday over the election legal challenges, President Trump’s attorney Rudy Giuliani cited irregularities that took place during the election, reading some of the sworn affidavits from different witnesses in different cities, telling reporters, “You should have had the time… to go look for them. That’s your job, like it’s my job to defend the president and to represent the president. It’s your job to read these things and not falsely report that there’s no evidence. Do you know how many affidavits we have in the Michigan case? 220. They’re not all public, but 8 of them are.”

Giuliani said of some of the sworn witness accounts, “At 4:30 in the morning, a truck pulled up to the Detroit Center where they were counting ballots– the people thought it was food, so they all ran to the truck. It wasn’t food. It was thousands and thousands of ballots. And the ballots were in garbage cans, they were in paper bags, … cardboard boxes, and they were taken into the Center. They were put onto a number of tables.”

Rudy Giuliani then explained the people working at the Detroit Center “thought that all the Republicans had left,” noting, “All but two had, and an employee of Dominion. And here’s what they jointly swear to: Every ballot that they could see, everything that they could hear, these were ballots for [Joe] Biden. When they saw a ballot, these were ballots only for Biden, meaning there was no down ticket. Just Biden. Many of them didn’t have anything on the outer envelope, because these ballots were produced very quickly, very swiftly, and they’re estimated to be a minimum of 60K maximum of 100K”.

The president’s lawyer also reported that “many of [the ballots] were tripled counted”, and noted that he “did not see that, I don’t know that, but for the fact that 3 American citizens are willing to swear to it.”

“There are 60 witnesses in this case that can prove what I’m saying to you and other acts of fraud in Michigan. And what’s happened to this country if we’re gonna let that happen …. [or] cover that up? … This happened in Pennsylvania, … in Michigan. Michigan probably, right now, if I count up the affidavits– counting ballots improperly, counting them 3 and 4 times, having people vote 3 and 4 times, changing and backdating ballots to the point of at least 300K illegitimate ballots that we can specifically identify,” he said.

“The margin in Michigan was 146,121 and, these ballots were all cast basically in Detroit that Biden won 80/20. So you see it changes the result of the election in Michigan if you take out Wayne County. It’s a very significant case. That is being raised in the case of Constantino versus the City of Detroit. Not by us, but by an individual plaintiff. We are helping and assistance in that case, however,” the president’s attorney noted of Mrs. Costantino and Mr. McCall, Jr. in their lawsuit against Wayne County for election fraud. Continued Below

Rudy Giuliani further pointed out that “you can find all the affidavits you want, filed in that case,” referring to Costantino v. Detroit. “And you can find out there not just allegations, they’re allegations supported by sworn testimony which is a lot better than Job Biden has ever done on anything. He doesn’t answer questions, much less give you sworn affidavits.”

Following Mr. Giuliani’s remarks, Rep. Alexandria Ocasio-Cortez (D-NY) posted a very small video clip of the former New York mayor’s remarks on Twitter and suggested that Republicans want to “undermine the election” by “stripping” rights from Blacks. In the partial video clip which AOC tweeted, Giuliani is heard saying, “It changes the results of the election in Michigan if you take out Wayne county.”

AOC claimed: “Translation of the Republican Party stance: ‘We can undermine the election by stripping Black Americans of their civil rights'”, adding, “‘Taking out Wayne County’ includes ‘taking out’ the entire city of Detroit, AKA the #1 city in the US when it comes to African American population by percentage.” Continued Below

A partial clip of Rudy Giuliani’s remarks which AOC tweeted:

"It changes the results of the election in Michigan if you take out Wayne county." pic.twitter.com/EcQSzOPpmc

“Taking out Wayne County” includes “taking out” the entire city of Detroit, AKA the #1 city in the US when it comes to African American population by percentage.

Twitter users immediately seized on AOC’s comments, instantly blasting her. We leave you with a few responses:

Stop using black people as your political props to mask your election theft. You got caught stuffing ballots. 200- 350% voter turn out in at least 80 precincts in Detroit. That’s called election fraud

If the votes counted are fraudulent, it means taking fraudulent votes. That is it.

Yes genius…it’s called election fraud. I don’t care what color the city is. The votes are illegal.

Stop using race as a method to distract from illegal activity.

It’s an insult to the intelligence of your audience.

Holy fuck. How is THIS about race now???

You lost house seats playing the race card. Give it up!!!!

It’s remarkable that you keep getting more and more out of touch with reality. Honestly, I am impressed.

Yay for the race card again! Believe it or not, the vast majority of us couldn’t care less about the color of someone’s skin…

All races voted for Trump. ALL RACES.

Rudy Giuliani’s full remarks, his comments over Wayne County begin at the 21:30 into the video:

(Related: Sidney Powell Claims To Have Enough Evidence To Prove ‘Millions’ Of Votes Were Fraudulently Shifted From Trump)