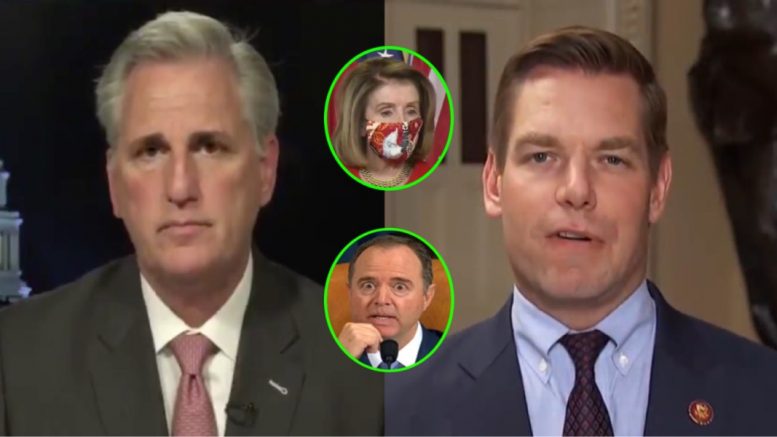 According to a report by Axios that was released on Monday, Rep. Eric Swalwell (D-CA), who is a member of the House Intelligence Committee, was targeted by a Chinese national named Fang Fang — aka Christina Fang — an alleged operative for China’s Ministry of State Security, which is the country’s intelligence organization, as reported by The Freedom Times.

House Minority Leader Kevin McCarthy (R-CA) called for Swalwell to be “removed from Congress”, suggesting he is “a national security liability” following the allegations that he was involved with a suspected Chinese spy.

Rep. McCarthy spoke with Fox News host Laura Ingraham on “The Ingraham Angle” Tuesday, wondering, “Why is [Swalwell] still on the Intel Committee, and why is he still a member of Congress?”

“This is only the tip of the iceberg because remember what we’re hearing. These are Chinese spies that go down to the level of a mayor. They court and help a city council member become a congressman. This congressman now gets on the intel committee. They are only selected from the intel committee by the leaders of their party, meaning Nancy Pelosi. Nancy Pelosi is one of the Gang of Eight, along with myself,” McCarthy said.

“Did Nancy Pelosi know this had transpired when she put him on the committee?” he asked. “We have our Senator Dianne Feinstein, for two decades, the personal assistant to hear all the private phone calls in the car and others, a Chinese spy.”

“Why did the Democrats pull out of the bipartisan China Task Force I had set up?” McCarthy questioned. “Why did Speaker Pelosi pull out of that? Why have they denied certain bills that would hold China accountable that have passed the Senate not come to the floor? Why do they focus on Silicon Valley members of Congress?” Continued Below

“Did Adam Schiff know as chairman of that committee that he had this problem? Remember what the intel committee gets: information that no other members are able to see and remember what this member did. He was so preoccupied going after this president, he wasn’t protecting our country from bad actors,” Rep. McCarthy pointed out.

When pressed by Politico to comment on the report from Axios, Swalwell said he is convinced that President Trump is behind the timing of the report’s release, and he suspects it was done to hurt him politically in retaliation for his criticism and actions taken against the President, reported The Freedom Times.

“I’ve been a critic of the president. I’ve spoken out against him. I was on both committees that worked to impeach him. The timing feels like that should be looked at,” Swalwell told Politico. Video Below

Swalwell added: “What it appears though that this person — as the story reports — was unsuccessful in whatever they were trying to do. But if intelligence officials are trying to weaponize someone’s cooperation, they are essentially seeking to do what this person was not able to do, which is to try and discredit someone.”

McCarthy responded, telling Ingraham, “Remember what Swalwell said: He accused the president of everything that he did by lying to the American public and sitting on the Intel Committee. Not only should he be removed from the intel, he should be removed from Congress as well. … And when did Adam Schiff know and when did the Speaker know? The Speaker appoints the Democrats in that committee.”

McCarthy: Why is Swalwell still in Congress after China spy report? pic.twitter.com/wmJcFc0Ptx

Rep. Swalwell has long been disqualified from serving on the Intel Committee. For years he peddled Russian disinformation for political gain.

Now we find out he was involved in an effort by a reported spy to gather info for China.

Swalwell is a national security liability.

Release it all. Americans want transparency especially since it looks like the Chinese Communist Party has totally infiltrated the democrat party. https://t.co/ja5l3WSvLa