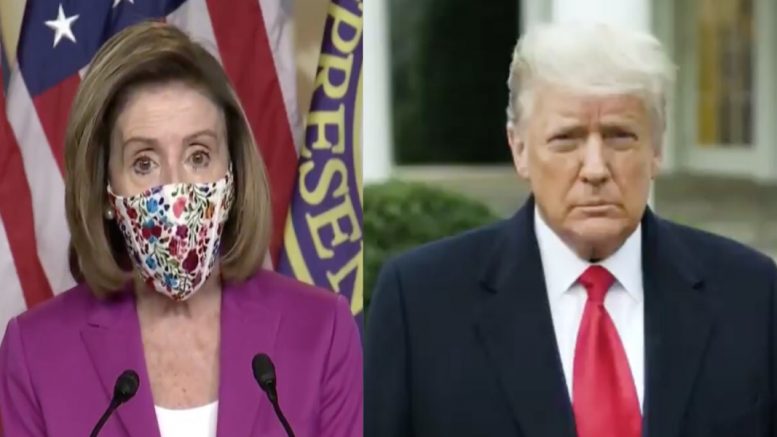 House Speaker Nancy Pelosi (D-CA) on Thursday, called for President Donald Trump’s immediate removal from office, saying that if Vice President Mike Pence does not invoke the 25th Amendment, House Democrats “may be prepared to move forward with impeachment”.

Her remarks echo that of Senator Chuck Schumer (D-NY) who also urged Vice President Pence and the cabinet to remove the Commander in Chief from office, calling him “a very dangerous person” who committed an “act of sedition.”

“Yesterday, the President of the United States incited an armed insurrection against America,” Pelosi claimed. “The gleeful desecration of the U.S. Capitol, which is the temple of our American democracy, as a violence targeting Congress are horrors that will forever stain our nations history instigated by the President of the United States. That’s why it’s such a stain”.

“In calling for this seditious act, the president has committed an unspeakable assault on our nation and our people,” Pelosi alleged.

“I joined the Senate Democratic Leader in calling on the vice president to remove this president by immediately invoking the 25th amendment. If the Vice President and cabinet do not, the Congress may be prepared to move forward with impeachment.” Video Below

Pelosi further claimed that President Trump is a “complete tool of Putin”, adding, “While it’s only 13 days left, any day could be a horror show for America”.

"While there are only 13 days left, any day could be a horror show for America" — Pelosi pic.twitter.com/1jFtYneIIp

JUST IN – Pelosi tried to call VP Mike Pence this morning to urge him to remove President Trump. She was kept on hold for 25 minutes before she was told Pence would not take her call (CNN).

Earlier in the day, Senate Minority Leader Chuck Schumer (D-NY) said Vice President Pence should “immediately” invoke the 25th Amendment and remove President Trump from office, while warning that if he refuses, Congress should “impeach the president.”

“What happened at the U.S. Capitol yesterday was an insurrection against the United States, incited by the president,” Schumer claimed in a statement Thursday. “This president should not hold office one day longer.”

“The quickest and most effective way – it can be done today – to remove this president from office would be for the vice president to immediately invoke the 25th Amendment,” Schumer said. “If the vice president and the Cabinet refuse to stand up, Congress should reconvene to impeach the president.” Continued Below

Rep. Alexandria Ocasio-Cortez (D-NY) posted a screenshot of articles of impeachment on Twitter Thursday, saying the articles had “already been drafted” by Rep. Ilhan Omar (D-MN) and “are ready for introduction.” More “members are signing on,” she said.

If the 25th amendment is not invoked today, Congress must reconvene immediately for impeachment and removal proceedings.

You can see further here. Either way, we do not have the luxury of time. https://t.co/E1yHqMHf7W

(Related: Mark Levin At CPAC: “You Know What [Dems] Were Doing When The Coronavirus Broke Out? Impeachment”