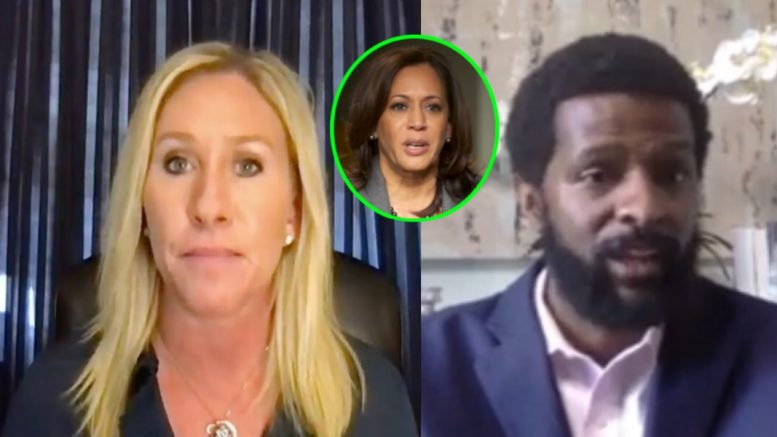 Rep. Majorie Taylor Greene (R-GA), during an interview on Newsmax Tuesday, said she wanted to “speak on behalf of the American people” who have had to endure “violence, riots, looting, burning, destruction of their businesses, destruction of their jobs with COVID shutdowns, closed churches, and closed schools” last year.

“Their entire lives just battered and ruined,” she said, before recommending that Congress should be “working for the American people and working to do our job to make sure they can live their lives fully and they are guaranteed the freedoms to so by the Constitution”, noting, “I don’t see that happening, and I’m very infuriated by it.”

Rep. Greene held up pages of 1500 business listings which were destroyed “during the Minnesota riots”, last year, then she pointed out, “these are the same riots that Kamala Harris shared– the Minnesota Freedom bail bond fun link.” 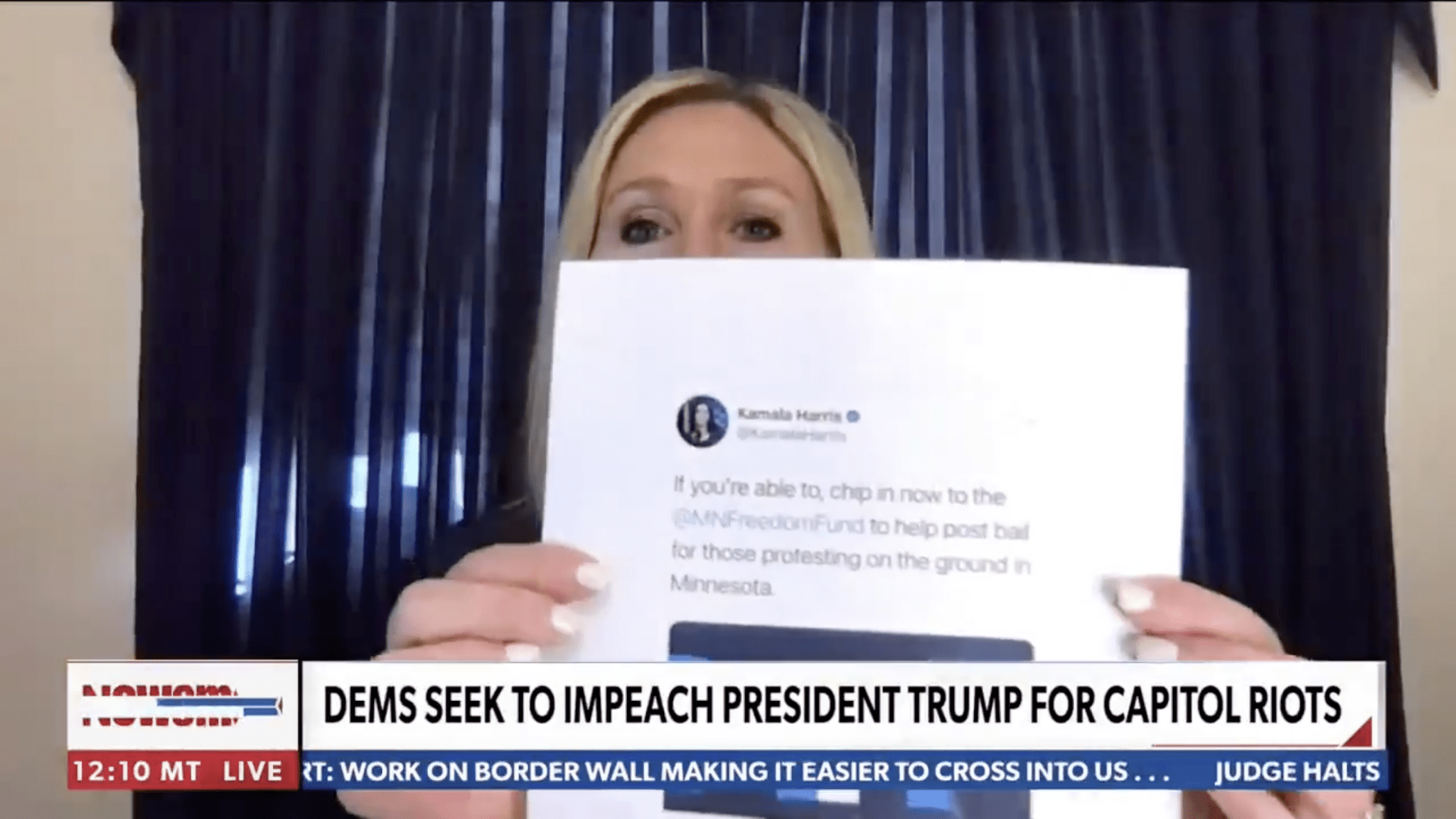 Rep. Greene was referring to Senator Kamala Harris (D-CA) who tweeted June 1, 2020, “If you’re able to, chip in now to the @MNFreedomFund to help post bail for those protesting on the ground in Minnesota.”

If you’re able to, chip in now to the @MNFreedomFund to help post bail for those protesting on the ground in Minnesota. https://t.co/t8LXowKIbw

The Minneapolis–Saint Paul riots in 2020 occurred beginning soon after the killing of George Floyd.

Minneapolis–Saint Paul experienced widespread rioting, looting, and property destruction over a three-night period in late May that resulted in $500 million in property damage—the second most destructive period of unrest in United States history, after the 1992 Los Angeles riots, according to Wikipedia. Continued Below

Rep. Greene went on to say during the interview, “This is who the radical left is. They support these violent riots, they support Antifa, they fund Black Lives Matter– the organization on ActBlue, their Democrat fundraising platform. And then they want to hypocritically impeach President Trump when he said nothing wrong.”

“He called for, and I quote him, ‘Peacefully and patriotically make your voices heard’ going to the Capitol. And then he told people to go home with love and peace and to remember this day forever,” she said.

“That was President Donald John Trump. He did not endorse the riots. He did not plan them and he did not cause them. This witch hunt that is happening this week is just a continuation of what we have seen for the past 4 years,” Rep. Greene explained. Video Below

The American people have had to endure violence, looting, & murder from BLM/Antifa rioting.

Jobs & businesses have been destroyed by COVID shutdowns.

All caused by Democrats.

This week is a continuation of 4 years of witch hunts against @realDonaldTrump. pic.twitter.com/ntW6isq317

Meanwhile, former South Carolina Democrat Rep. Bakari Sellers tweeted on Tuesday, “Yes every member of Congress needs to go through a metal detector. Do you think we need @mtgreenee or @RepMoBrooks just walking up on Kamala Harris?”

Rep. Greene responded to the former congressman’s tweet, expressing, “Are you kidding me Americans are rightly terrified of @KamalaHarris. She supported, promoted riots & shared the MFF bail link and asked for donations to help get radical criminals out of jail after they burned, looted, & destroyed over 1,500 properties in MN and $2B in damage!”

Are you kidding me?
Americans are rightly terrified of @KamalaHarris.
She supported, promoted riots & shared the MFF bail link and asked for donations to help get radical criminals out of jail after they burned, looted, & destroyed over 1,500 properties in MN and $2B in damage! https://t.co/CRy2IKH7zu

Democrats should take a good hard look in the mirror before they try to impeach President Trump, censure Republicans, and point fingers.

What goes around, comes around.#Democrats #Hypocrites

(Related: Kamala Harris Suggests Nationwide Protests Are An ‘Essential Component Of Evolution In Our Country’)