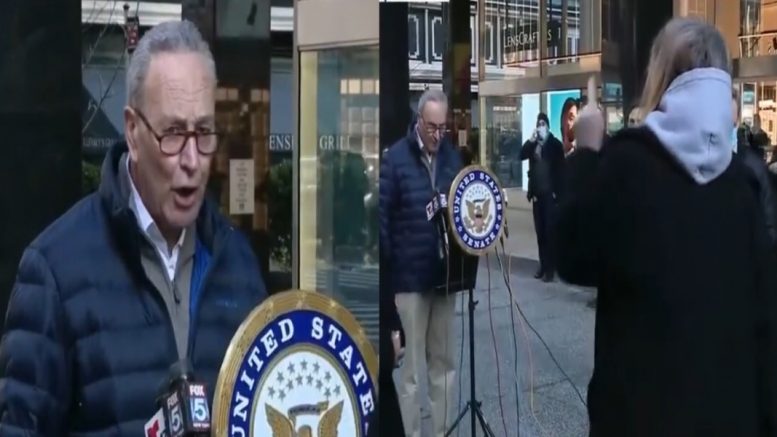 A protester lashed out at Senate Minority Leader Chuck Schumer while he was giving a press conference Tuesday afternoon in Manhattan, telling the New York Democrat Senator that he is “nothing but a coward.”

As Schumer was wrapping up a plea to the TSA to add the US Capitol rioters to the no-fly list, the mask-wearing woman stepped in front of the podium and hurled insults at the lawmaker from Brooklyn, New York Post reported.

“You’re nothing but a racist,” the woman shouted at Senator Schumer before security guards moved in and tried to interrupt her. “Get your hands off me. You don’t need to touch me. I’m talking to this racist, anti-Semite.”

“You’re nothing but a coward!” she yelled at Schumer, saying she was “glad” to see last Wednesday’s events unfold at the US Capitol.

“And just like Nancy Pelosi says, ‘They will do what they do’– after all, she doesn’t care about monuments, and neither do I. And where in the First Amendment does it say that you have to protest peacefully and politely? As long as there’s outrage and unrest in our hearts, there’s gonna be unrest in these streets,” the woman told the New York Senator. “I don’t give a s**t whether you believe me.” Continued Below

“You’re nothing but a cracker. That’s all you are. You’re a racist cracker,” the woman then said, demanding to know whether he told the US Capitol Police to “stand down.”

“And you know what? These Trump supporters are gonna go to your house. They’re gonna go to Pelosi’s house. They’ll destroy her vineyards, and I will be right there to support them,” she told Schumer. Video Below

Watch the exchange below:

Here is an alternate angle:

Earlier, a separate heckler disrupted the presser: “Traitor! Treason! You’re going down, buddy! Traitor! To this nation! Everyone knows!”

Schumer paused, then continued the topic at hand: “We are concerned about these people getting back on airplanes, doing more violence.”