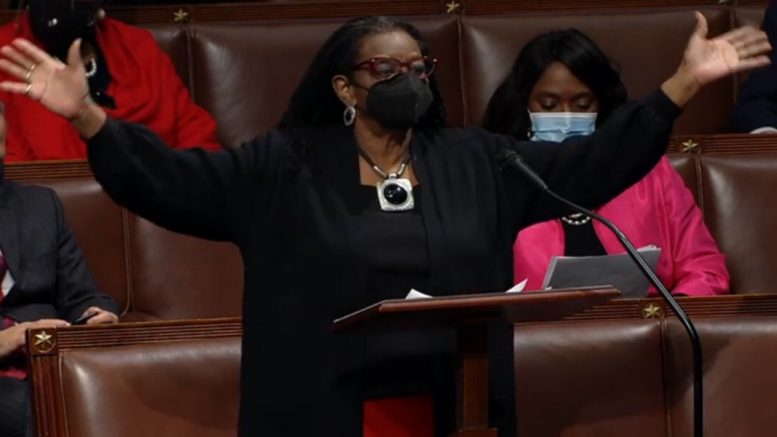 Rep. Gwen Moore (D-WI) on Wednesday, argued for President Trump’s impeachment and warned her colleagues of what she thought could potentially happen during the remainder of the Commander in Chief’s term in office.

“The president radicalized American citizens,” she alleged. “And as his vice president fled from a lynch mob, the Speaker cowered while people died. He watched with glee.”

“That is why, even though it is only seven days before the end of his term, we have the fierce urgency of now. Seven days is too long for him to be in power,” Rep. Moore said.

The Wisconsin Democratic congresswoman then warned her colleagues of a key consequence they could face if President Trump is not removed.

“He could declassify state secrets,” Rep. Moore announced, without naming what information she and her colleges may be worried about. “He could monetize national secrets to board adversaries, and he could even pardon the person that — who killed the Capitol police officer”.

President Donald Trump on October 6, 2020 tweeted, “I have fully authorized the total Declassification of any & all documents pertaining to the single greatest political CRIME in  American History, the Russia Hoax. Likewise, the Hillary Clinton Email Scandal. No redactions!” Continued Below

The president was responding to a tweet from Paul Sperry, who had written, “When all the documents are finally declassified, and all the redactions removed from reports, the nation will see that the FBI and CIA not only knew the Russia ‘collusion’ allegations against Trump were a political dirty trick, but that they were in on the trick.”

“Unless Bill Barr indicts these people for crimes– the greatest political crimes in the history of our country– then we’re going to get little satisfaction unless I win, and we’ll just have to go because I won’t forget it,” he said. “But these people should be indicted. This was the greatest political crime in the history of our country.” Video Below

Last year, the president gave former Attorney General Bill Barr authority to declassify any documents related to surveillance of the Trump campaign in 2016. President Trump, at the time, also directed members of the intelligence community to cooperate with AG Barr’s investigation.

The president’s tweet in October came after Director of National Intelligence John Ratcliffe declassified documents which revealed former CIA Director John Brennan briefed former President Barack Hussein Obama on twice failed presidential candidate Hillary Clinton’s purported “plan” to tie then-candidate Donald Trump to Russia as “a means of distracting the public from her use of a private email server” ahead of the 2016 presidential election.

NEW: declassified @JohnBrennan notes from briefing @BarackObama per @DNI_Ratcliffe
“Alleged approved by @HillaryClinton a proposal from one of her foreign policy advisers to vilify @realDonaldTrump by stirring up a scandal claiming interference by the Russian security service.” pic.twitter.com/IiVb4XlGke

Former Attorney General Bill Barr appointed U.S. Attorney of Connecticut John Durham to investigate the origins of the FBI’s Russia probe, and in October 2019, Durham’s probe shifted to a criminal probe. Durham has since been appointed special counsel by the former attorney general– before Barr resigned in December.