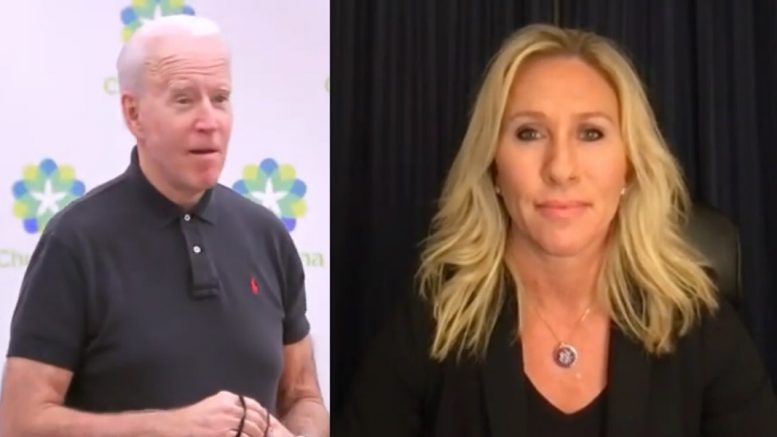 Rep. Marjorie Taylor Greene (R-GA) on Wednesday announced that she will be filing articles of impeachment against Joe Biden “for abuse of power” on January 21, 2021.

The freshman congresswoman made the formal announcement in a tweet Wednesday evening and also during an interview with host Greg Kelly on Newsmax.

On January 21, 2021, I'll be filing Articles of Impeachment against Joe Biden for abuse of power.#ImpeachBiden #QuidProJoe#BidenCrimeFamilly

While speaking with host Greg Kelly on Newsmax, Rep. Greene told viewers, “I would like to announce on behalf of the American people, we have to make sure our leaders are held accountable. We cannot have a president of the United States that is willing to abuse the power of the office of the presidency and be easily bought off by foreign governments, Chinese energy companies, Ukrainian energy companies”.

“On January 21st, I will be filing articles of impeachment on Joe Biden,” she declared.

“I’m a big believer in having people in office who are actually willing to do the job, and I can’t imagine people in this country being so fearful of a future of a Biden presidency that they may be willing to commit violence like they did in the Capitol here in Washington, D.C. We cannot have that; I do not condone that violence,” Rep. Greene explained. Video Below

The Georgia representative went on to say, “The American people need hope. They need to know there are Republicans in Congress who are willing to stand up and fight for them regardless of being in a minority party, regardless of having all odds against us, against me, or against anyone in Congress. We have to hold people accountable”.

“Joe Biden is on record, on the phone, saying that he would withhold a billion dollars of foreign aid if he didn’t get his way with these deals with his son Hunter. And there’s an ongoing investigation with Hunter’s laptop– into being bough and paid for Communist Chinese energy companies,” she said.

“This is a dangerous threat to our country when we have a man who will be holding the power of the presidency and will so easily and is on record for abusing power,” Rep. Greene added.

The Senate in 2020, released an 87 page report titled: “Hunter Biden, Burisma, and Corruption: The Impact on U.S. Government Policy and Related Concerns”