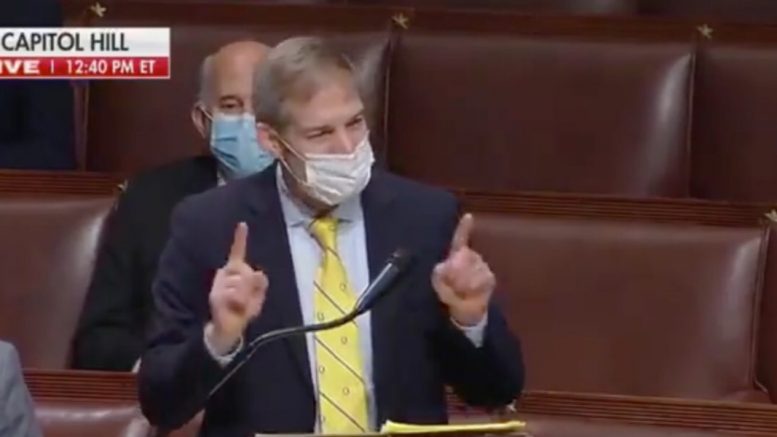 Rep. Jim Jordan (R-OH) on Wednesday argued against impeaching President Donald Trump after House Democrats on Monday, introduced an impeachment resolution against the Commander in Chief for alleged incitement of an insurrection, just days after the Capitol breach, claiming the president “warrants impeachment and trial, removal from office, and disqualification to hold and enjoy any office of honor, trust, or profit under the United States”.

“In seven days there will be a peaceful transfer of power just like there has been every other time in our country, but Democrats are gonna impeach President Trump again. This doesn’t unite the country,” the Ohio congressman said.

“There’s no way this helps the nation. There’s no way this helps the nation deal with the tragic and terrible events of last week that we all condemned. Republicans have been consistent: we’ve condemned all the violence, all the time. We condemned it last summer, we condemned it last week. We should be focused on bringing the nation together, instead Democrats are going to impeach the president for a second time one week before he leaves office,” Mr. Jordan explained.

He wondered why Democrats pursue endless impeachments against President Donald Trump, but predicted it is because of “politics”, and “the fact that they want to cancel the president”.

“The president who cut taxes, … reduced regulations, the president prior to COVID had the greatest economy, the lowest employment in fifty years, … got us out of the Iran Deal, put the embassy in Jerusalem, brought hostages home from North Korea, put three great Justices on the Supreme Court, gave us a new NAFTA agreement, the Abraham Accords, the COVID vaccine, and who built the wall,” Rep. Jordan detailed. Continued Below

“It’s about politics. This is about getting the President of the United States. They spied on his campaign before he was elected. Nineteen minutes into his presidency they started the impeachment push, three year Mueller investigation, nineteen lawyers, forty agents, five-hundred witnesses, 2,500 subpoenas, forty million dollars to find nothing,” the Ohio lawmaker continued.

“Impeachment round one based on an anonymous whistleblower with no first hand knowledge, who was biased against the president and who worked for Joe Biden, and now it’s impeachment round two. It’s always been about getting the President, no matter what. It’s an obsession, an obsession that has now broadened,” he said at the podium, blasting Democrats.

“It’s not just about impeachment anymore, it’s about canceling as I’ve said. Canceling the president and anyone that disagrees with them. The Ayatollah can tweet, the president can’t. Democrats can object on January 6, 2017, but Republicans aren’t allowed to object on January 6, 2021. Democrats say antifa is a myth, Republicans condemn all violence all the time,” Rep. Jordan said. Video Below

“The double standard has got to stop,” Rep. Jordan urged. “And frankly, the attack on the First Amendment has to stop. Stop and think about it. Do you have a functioning First Amendment when when the cancel culture only allows one side to talk? When you can’t even have a debate in this country, this great country, the greatest country ever? … The cancel culture will come for us all.”

Rep. @Jim_Jordan: “It’s always been about getting the President, no matter what.” pic.twitter.com/VjM9HTLeNH

They spied on President Trump’s campaign in 2016.

They investigated his family and friends.

They impeached him once. And today, they’re trying to do it again.

Despite all that, he never stopped working for you.

Today's #impeachment efforts aren't about principle. They're about politics.