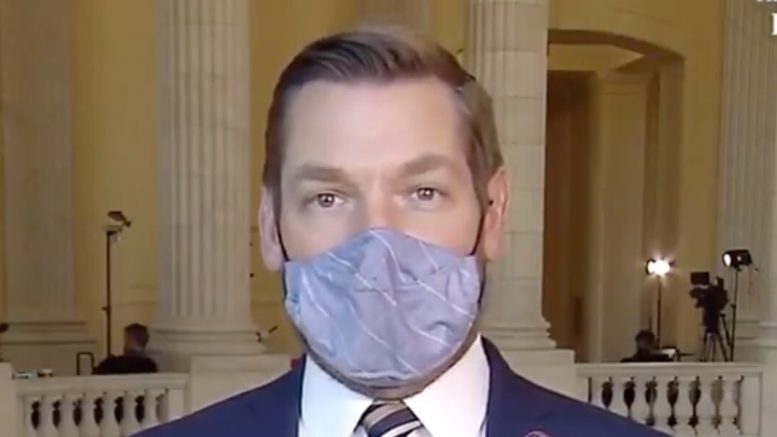 Rep. Eric Swalwell (D-CA), who had reported ties to a suspected Chinese spy named Christine Fang or Fang Fang, and who has been appointed as an “impeachment manager” by House Speaker Nancy Pelosi (D-CA), claimed that President Trump “inspired and radicalized people” the same way Osama Bin Laden inspired September 11, 2001.

Both Kevin McCarthy (R-CA) and Pelosi received a briefing in December from the FBI in regards to Rep. Swalwell’s relationship with an alleged Chinese spy, yet he remains on the House Intelligence Committee.

In an interview with PBS News Hour, Eric Swalwell alleged President Trump’s actions were comparable to the Bin Laden after rioters supporting the president breached the U.S. capitol on January 6, committing acts of vandalism and violence and postponing the electoral college certification process, forcing members of Congress to evacuate the building.

“Well, Osama Bin Laden did not enter US soil on September 11, but it was widely acknowledged that he was responsible for inspiring the attack on our country and the president, with his words, using the words ‘fight’ with the speakers that he assembled that day, who called for trial by combat, and said we have to take names and kick ass, that is hate speech that inspired and radicalized people to storm the Capitol,” Swalwell claimed.

“When you read the indictments from the U.S. attorney’s office of people who’ve been arrested, in their FBI interviews, they cite they were called there by the president,” he asserted. “They were in the Capitol because the president told them to do so. We must hold this president accountable for his inciting words.”

Asked directly if he was comparing President Donald Trump to Bin Laden, the radical left congressman did not directly respond to the question, but instead alleged, “I’m comparing the words of a individual who would incite and radicalize somebody as Osama Bin Laden did to what President Trump did. You don’t actually have to commit the violence yourself, but if you call others to violence that itself is a crime”. Video Below

In December, a group of 17 top House Republicans sent a letter to Speaker of the House Nancy Pelosi demanding Swalwell be removed from the House Intelligence Committee after news broke about his relationship with a suspected Chinese spy.

Further evidence that IMPEACHMENT is a JOKE: one of the “managers” of impeachment will be FANG FANG’s ex-boyfriend SWAWELL. (Tomorrow on @newsmax) pic.twitter.com/cFU9rdjwXb