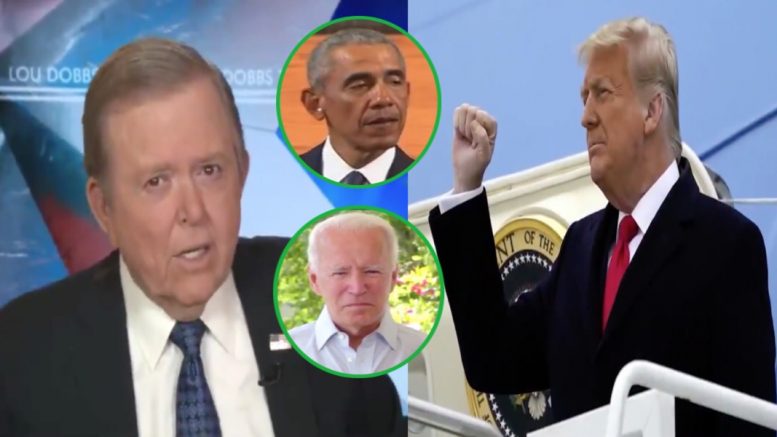 Thursday on Fox Business, host Lou Dobbs announced that “President Donald Trump is declassifying top secret documents all related to Obama-Gate”, the “coordinated and years long spying against a presidential candidate and ultimately the President of the United States and his administration– that of Donald J. Trump”.

Lou Dobbs reported that the documents are “expected to be released to the public as early as [Friday] or perhaps Monday.”

John Solomon told Lou Dobbs on Thursday during an interview, “I can confirm … [President Trump] has delivered in a big way– more than a foot high stack of documents. He has authorized [the] release by the FBI and the Justice Department. These are the things that the FBI tried to keep from the public for 4 years. They have amazing, big picture revelations”

“Let’s start with what I think is the most important one. Christopher Steele in his debriefings with the FBI, after he was fired for leaking– he told the FBI, ‘The reason I leaked is because I needed to help Hillary Clinton cover up her email problem. So I leaked to turn the attention to Donald Trump’. The Russia- collusion narrative was invented to protect Hillary Clinton from ongoing revelations about her email scandal. It was a political dirty trick and that was Christopher Steele’s own words,” Solomon said.

“Similarly, Stefan Halper, the guy that recorded [George] Papadopoulos and Carter Page– in his tasking orders, the FBI is tasking him, my sources tell me from weeks and reporting on this, that he was told to spy on the Trump campaign,” Solomon told Dobbs.

“In fact, he was given a cover– try to pretend you might want to get involved, get hired by the Trump campaign and then start talking to people and pumping them for information. In anyone’s book, that is spying. … This document when it’s released … will blow out of the water any idea other than the FBI was spying on the Trump campaign as early as August [20]16. The word ‘Trump campaign’ was all over the FBI documents,” he explained.

Solomon also said, “I’ll tell you something that’s going to become clear in these documents: the continuity and the connectivity between the Russian-collusion false story that was planted in America for three years, and the subsequent impeachment against the president in the beginning of 2020, enormous connectivity.” Video Below

“In Christopher Steele’s debriefing, he acknowledges that he got his primary sub-source, the main guy who gave him all the bogus information, who later disowns him … a star impeachment witness that the Democrats paraded it around on camera, was the person that connected Christopher Steele to that bogus witness– that witness that gave bogus information. … To see the continuity, that really Russia, then Ukraine, and whatever else happened, it’s all interconnected. It’s all the same players time and again,” Solomon reported.

“When we were having the proceedings, we were kept in the dark. We didn’t know that witness had this connection to Christopher Steele,” Solomon said. “Important information about to be made public, thanks to the president and his declassification decision”.

(Related: Democrat Rep. Warns Colleagues Of A Key Consequence They Face If Trump Is Not Removed: “He Could Declassify”