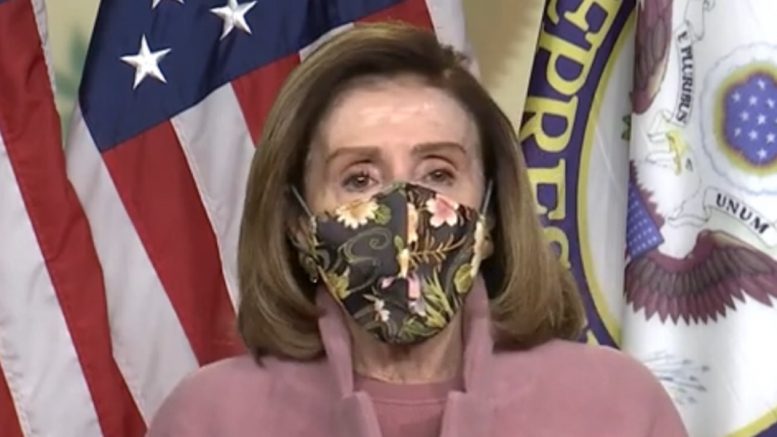 House Speaker Nancy Pelosi (D-CA) on Thursday held a news briefing and was asked by a reporter over the subject of “unity” and “impeachment” against former President Donald Trump.

“You mentioned unity in a message of unity yesterday. Are you at all concerned about moving forward with an impeachment trial could undercut that message and alienate Republican supporters of the president?” a reporter directly asked Pelosi.

“No. No, I’m not worried about that,” Pelosi replied.

“The fact is, the President of the United States committed an act of incitement of insurrection,” Pelosi claimed.

“I don’t think it’s very unifying to say, ‘Oh, lets just forget it and move on.’ That’s not how you unify. Joe Biden said it beautifully: ‘We’re gonna unite, you must remember’. And we must bring this– and we– look. This is our responsibility, to uphold the integrity of the Congress of the United States. That’s our responsibility: to protect and defend the Constitution of the United States. And that is what we will do,” she said.

“And just because he’s now gone, thank God, that we– you don’t say to a president, ‘Do whatever you want in the last parts of your administration. You’re gonna get a ‘get out of jail card’ for free, because people think we should make nice and forget that people died here on January 6– that the attempt to undermine our election, to undermine our democracy, to dishonor our Constitution. No. I don’t see that at all. I think that would be harmful to unity,” Pelosi asserted. Video Below

“I don’t think it’s very unifying to say ‘Let’s just forget it and move on,’” Speaker Nancy Pelosi said Thursday about her intention to send an article of impeachment against former President Donald Trump to the Senate soon. https://t.co/XgB1JTqilI pic.twitter.com/KGZhJnKX6U

Meanwhile, Senate Republican leader Mitch McConnell (R-KY) is proposing to push back the start of former President Donald Trump’s impeachment trial by a week or more to give him time to review the case.

The timing will be set by House Speaker Nancy Pelosi, who can trigger the start of the trial when she sends the House charges for “incitement of insurrection” to the Senate, and also by McConnell and new Senate Majority Leader Chuck Schumer, who are in negotiations over how to set up a 50-50 partisan divide in the Senate and the short-term agenda, AP reported.

Schumer told reporters Thursday that he was still negotiating with McConnell on how to conduct the trial, “but make no mistake about it. There will be a trial, there will be a vote, up or down or whether to convict the president.”

BREAKING: As federal investigators continue to suggest Jan 6 was planned, Biden admin being told by both sides of the aisle today that a Trump conviction is highly unlikely.

The briefs were transcribed in full, and participants took noted. Standard capitol security measures were mentioned, but threats against the building and those inside were conveyed as slim to none to President Trump.