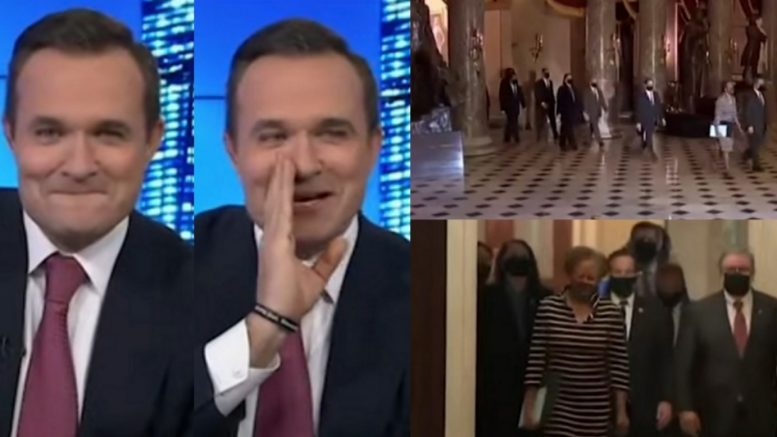 “What a joke!” Newsmax host Greg Kelly said in reaction to House Democrats walking impeachment documents to the Senate on Monday.

“There are fifteen people delivering two folders. Is that typical swamp or what?” he added.

Mr. Kelly — who is clearly at wit’s end with Democrats’ efforts against former President Donald Trump — used airtime on his Tuesday afternoon program to have a little fun at the expense of Impeachment 2.0.

“I rigged up some special music. I think this is far more apropos than a bunch of anchors talking about how significant this is for the country,” Greg Kelly said before rolling a clip 15 House Democrats walking a single article of impeachment to the Senate with clown music playing in the background.

“Folks, they don’t even have the votes and we know it’s a sham, but look at how seriously they take it,” Greg said while trying to keep a straight face. “And by the way, this costs money. We are paying for this. Wow, they are something else,, aren’t they?” Video Below

"Look at how seriously they take it, and by the way – we're paying for this," says Greg Kelly. "They are something else, aren't they?" https://t.co/VlT7z8drtO pic.twitter.com/Oy42Ab7D2x

In ending, here is an extended video of Greg Kelly’s Tuesday commentary: