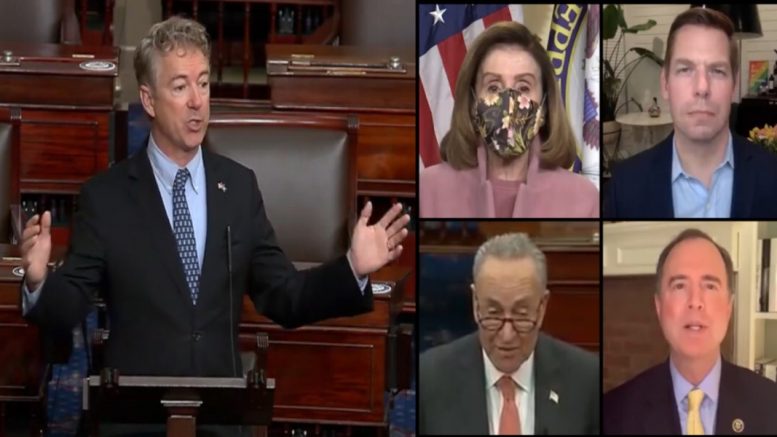 Senator Rand Paul (R-KY) took to the Senate floor Tuesday to rail against the impeachment against former President Donald Trump, calling it a “sham”.

“This impeachment is nothing more than a partisan exercise designed to further divide the country further. Democrats claim to want to unify the country, but impeaching a former president, a private citizen, is the antithesis of unity,” Senator Paul said.

“Democrats brazenly appointed an openly pro-impeachment Democrat to preside over the trial is not fair or impartial, and hardly encourages any kind of unity in our country. Unity is the opposite of what we are about to witness,” the Kentucky Senator suggested.

He continued: “Hyperpartisan Democrats are about to drag our great country down into the gutter of rancor and vitriol, the likes of which have never been seen in our nation’s history. Instead of doing the nation’s work with their new majorities of the House, Senate, and executive branch, Democrats are wasting the people’s time on a partisan vendetta against a man no longer in office. It’s almost as if they have no ability to exist except in opposition to Donald Trump. Without him as their boogeyman, they might have to legislate, and to actually convince the public that their policy prescriptions are the right ones.”

“Democrats are about to do something no self-respecting senator has ever stooped to. They are insisting the election is actually not over, and so they insist on regurgitating the bitterness of the election. This acrimony they are about to unleash, has never before been tried. Why? Because calmer heads have typically prevailed in our history and allowed public opinion to cast blame where blame is deserved,” the Republican Senator said. Continued Below

“But what of Democrats’ words, what of Democrats’ incitement to violence? No Democrat will honestly ask whether Bernie Sanders incited the shooter that nearly killed [Rep.] Steve Scalise and a volunteer coach. The shooter nearly pulled off a massacre. I was there. Because he fervently believed the false and inflammatory rhetoric spewed by Bernie and other Democrats, such as “The Republican healthcare plan for the uninsured is that you die.” As this avowed Bernie supporter shot Steve Scalise, nearly killing him, and shot one of our coaches. He screamed, ‘This is for healthcare!’ Ask me or anyone if that’s incitement,” he urged.

“…. No Democrat will ask whether Maxine Waters incited violence when she literally told her supporters, and I quote, ‘If you see a member of the Trump Cabinet at a restaurant, a department store, a gas station, or any place, you create a crowd and you push back on them.’ Is that not incitement?” Senator Paul wondered. Video Below

Transcript is as follows:

My wife and I were pushed and surrounded by the type of mob that Maxine likes to inspire. It’s terrifying to have a swarm of people threatening to kill you, curse at you, and hold you literally hostage until police come to your rescue. That night we were assaulted by the crowd, I wasn’t sure if we would survive, even with the police protection.

But no Democrat has ever considered impeaching Maxine for her violent rhetoric.

Democrats insist on applying a test of incitement to a Republican that they refuse to apply to themselves. I want the Democrats to raise their hands if they have ever given a speech that says, ‘Take back. Fight for your country. Who hasn’t used the words fight figuratively? And are we going to put every politician in jail? Are we going to impeach every politician who has used the words fight figuratively in a speech? Shame! Shame on these angry, unhinged partisans, who are putting forth this sham impeachment, deranged by their hatred of the former president. Shame on those who seek blame and revenge, and who choose to pervert a constitutional process while doing so.

I want this body on record, every last person here. Is this how you think politics should be? … You can’t impeach, censor, expel people you disagree with. What’s this coming to? … This proceeding is is unconstitutional– that impeachment trial of a private citizen is illegal and essentially a bill of attainder and that no sense of fairness or due process would allow the judge in a proceeding to be a partisan Democrat already on favor of the impeachment.

A sham this is, a travesty, and a dark blot on the history of our country.

I urge my colleagues to reconsider this kangaroo court and move forward to debate the great issues of our day.