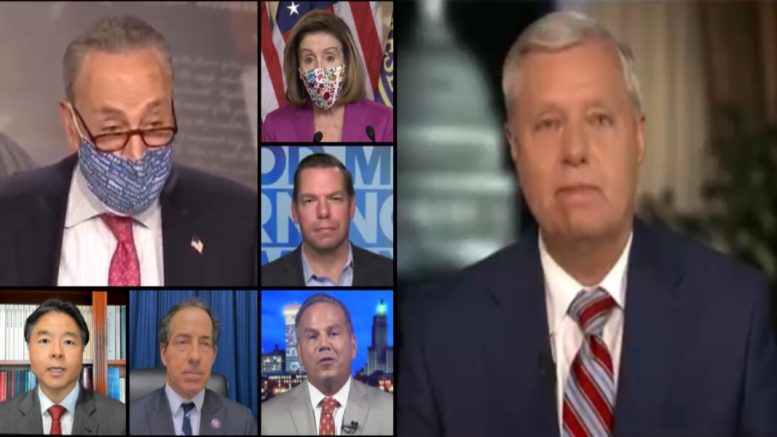 Senator Lindsey Graham (R-SC) on Tuesday told Fox News host Sean Hannity that President Donald Trump’s second impeachment is “unconstitutional and ill-conceived”, noting that it has not been carried out legally.

“The President of the United States was impeached in 50 hours without one witness being called, and he didn’t have a lawyer,” Graham said. “We need to make sure this thing never goes anywhere– is because I don’t want to legitimize the impeachment process used in the House. I think it’s a danger to democracy and the presidency itself.”

Senator Lindsey Graham explained that on day one of the trial, there will be a motion to dismiss, which he expects to occur. But if it goes to trial and the House managers attempt to call witnesses who were not present during the deliberation in the House, the entire process will be dragged out for “weeks if not months.”

“[Democrats] never called a witness in the House. If there’s an effort by the Democrats to call a single witness in the United States Senate, they had no record in the House– there will be delay of this trial, there will be a Pandora’s box being opened. We will want witnesses and this thing will go on for weeks, if not months,” the South Carolina senator predicted.

“I’m hoping we have a trial based on a stipulation of fact, not witnesses, so we can get this behind us in about three days after we begin,” he said.

Asked why Democrats would facilitate a “snap impeachment”, along with wondering if the attack on the U.S. Capitol was pre-planned, and not solely instigated by the president’s speech, Graham replied, “The reason I know there was no incitement that would equal a crime by President Trump, is they’re not playing it on those other networks.” Continued Below

“Have you seen one clip of President Trump speaking where somebody said, ‘This is a crime’? The fact that there’s no clip, tells you all you need to know. Why are they doing this? They are afraid. I think Democratic Senators are afraid of the leftwing of their party– that if they don’t give some credibility to this trial that started in the House, they’re in trouble,” Senator Graham speculated.

Meanwhile, Senator Graham believes Joe Biden has been a “huge disappointment” in carrying out his message of unity, noting that it would be easy for him to end the entire impeachment charade and put the past behind everyone.

“It tells you a lot about Biden’s ability and desire to bring us together by the fact that he’s sitting on the sidelines and his only comment has been, ‘I don’t think they have the votes,'” he pointed out. Video Below

“I’d like to get this trial over sooner rather than later,” Senator Graham said. “To my Democratic colleagues, if you try to call one witness, you’re going to blow up the United States Senate. Don’t do that. Let’s get this travesty over with quickly.”

(Related: Sen. Rand Paul: “The Impeachment Is Dead, It’s Dead On Arrival. It Takes 67 Votes. The Dems Could Only Muster 55 Votes”)