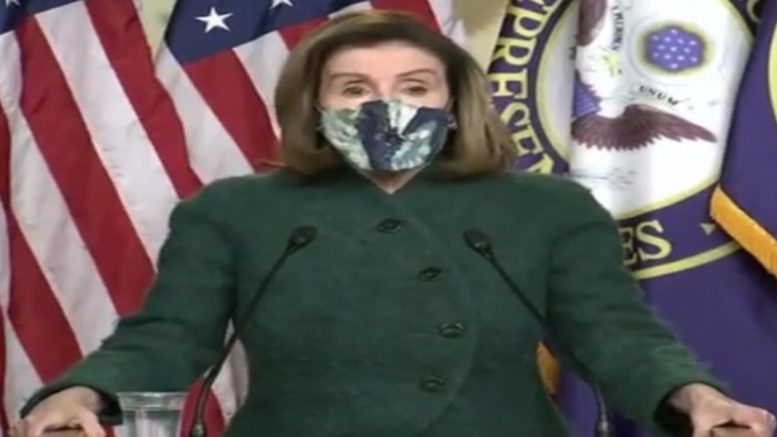 Speaker Nancy Pelosi (D-CA) claimed on Thursday that the House of Representatives would likely need to pass additional funding for members safety because “the enemy is within,” referring to lawmakers who want to use their constitutional Second Amendment right. The Second Amendment of the United States Constitution reads: “A well regulated Militia, being necessary to the security of a free State, the right of the people to keep and bear Arms, shall not be infringed.”

“We will probably need a supplemental [budget] for more security for members when the enemy is within the House of Representatives — a threat that members are concerned about, in addition to what is happening outside,” Pelosi alleged during her weekly news conference.

Nancy Pelosi claimed “the enemy is within”:

After 30 members sent a letter asking to use congressional funds for security, Pelosi says, “We will probably need a supplemental for more security for members when the enemy is within the House of Representatives…in addition to what is happening outside” https://t.co/bM4co7aVpQ pic.twitter.com/mp4riI63Zc

Last summer when violent riots occurred throughout the country, Pelosi also called Republicans “domestic enemies” and “enemies of the state” during an interview on MSNBC, in regards to America’s voting system.

“They’re trying to interfere in our election,” Nancy Pelosi claimed. “But they’re not the only ones. We take an oath to protect and defend the Constitution from all enemies, foreign and domestic. And sadly, the domestic enemies to our voting system and honoring our Constitution are right at 1600 Pennsylvania Avenue with their allies in the Congress of the United States.”

“But again, let’s just get out there and mobilize, organize, and not let the President deter anybody from voting, and again, support the postal system which is election central. They’re doing everything they can, suppress the vote with your actions, scare people and intimidate by saying law enforcement will be there, diminish the role of the postal system and all of this. It’s really actually shameful, and enemies of the state,” Pelosi alleged.