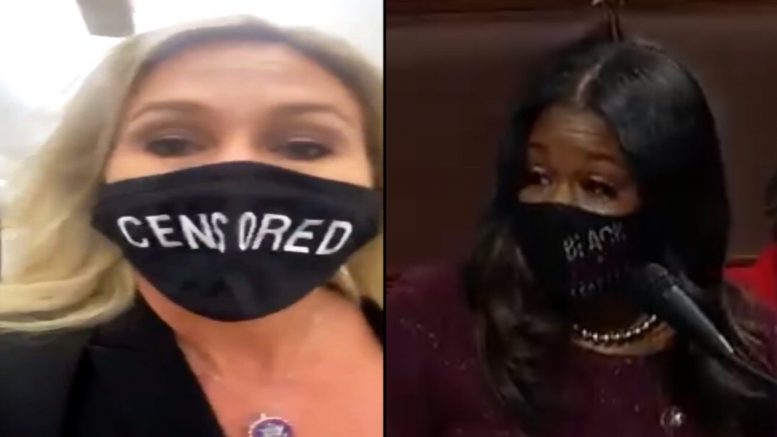 Rep. Cori Bush (D-MO) announced Friday that she will be moving her office away from Rep. Marjorie Taylor Greene (R-GA), following an altercation earlier this month where Bush confronted Greene about not wearing a mask in a hallway on Capitol Hill.

Rep. Greene, however, was “live on video” walking through the hallway, proving that the instigator of the exchange was in fact, Bush, who had targeted Greene.

“A maskless Marjorie Taylor Greene & her staff berated me in a hallway. She targeted me & others on social media. I’m moving my office away from hers for my team’s safety. I’ve called for the expulsion of members who incited the insurrection from Day 1. Bring H.Res 25 to a vote,” Rep. Cori Bush tweeted on Friday.

The fallout led House Speaker Nancy Pelosi (D-CA) to order Bush’s office to be moved away from Greene, following a request from Bush.

Greene spokesman Nick Dyer responded to Bush’s accusation in a statement to CNN by saying, “Rep. Bush is actually the instigator and it’s on tape. We’ll be releasing the video shortly.” Greene’s office tweeted a short video of the congresswoman talking into her phone and someone in the background yelling at her to put a mask on, CNN reported.

At the time, Rep. Greene was walking in the tunnel between the Cannon House Office Building and the Capitol, on a Facebook livestream disputing charges she supported the Jan. 6 violence at the Capitol and accusing Democrats of looking the other way on antifa violence in several cities over the past year. Continued Below

As Greene spoke, her black mask, with the word “Censored” on it, was around her chin. At about 37 seconds into the video, Bush yells “put on a mask” at Greene.

As the video rolls, Greene pulled up her mask and turned back to say, “You know what, don’t yell at people,” as Bush continues to shout about masks. Greene then referenced the surprising decision by Speaker Nancy Pelosi to let coronavirus infected members into the Capitol to vote for her for speaker. “You shouldn’t bring COVID positive members in here spreading COVID everywhere. Stop being a hypocrite,” Washington Examiner reported.

The Georgia congresswoman released the video Friday afternoon on Twitter, along with writing in her post, “Rep. Cori Bush is the leader of the St. Louis Black Lives Matter terrorist mob who trespassed into a gated neighborhood to threaten the lives of the McCloskey’s. She is lying to you. She berated me. Maybe Rep. Bush didn’t realize I was live on video, but I have the receipts.” Video Below

Rep. @CoriBush is the leader of the St. Louis Black Lives Matter terrorist mob who trespassed into a gated neighborhood to threaten the lives of the McCloskey’s.

She is lying to you. She berated me.

Maybe Rep. Bush didn’t realize I was live on video, but I have the receipts. https://t.co/CJjnI3ZTjC pic.twitter.com/ZMLGOGjxKw

On Jan. 13 — after members tested positive for COVID-19 after being locked down with her on Jan. 6 — Marjorie Taylor Greene came up from behind me, loud and unmasked. I called out to her to put hers on.

Her staff yelled at me, “Stop inciting violence with Black Lives Matter.” pic.twitter.com/GtN5AmGrkO

Rep. Greene also released a statement on Friday, saying in part, “I will never back down. I will never give up. Because I am one of you. And I will always represent you. I take all these slings and arrows gladly for you. I take them for our America First movement so that we can save our country and stop socialism. I knew this day would come, it was only a question of when.”

“If Republicans cower to the mob, and let Democrats and the fake news media take me out, they’re opening the door to let the vicious cancel culture mob take out every one of you,” she said.