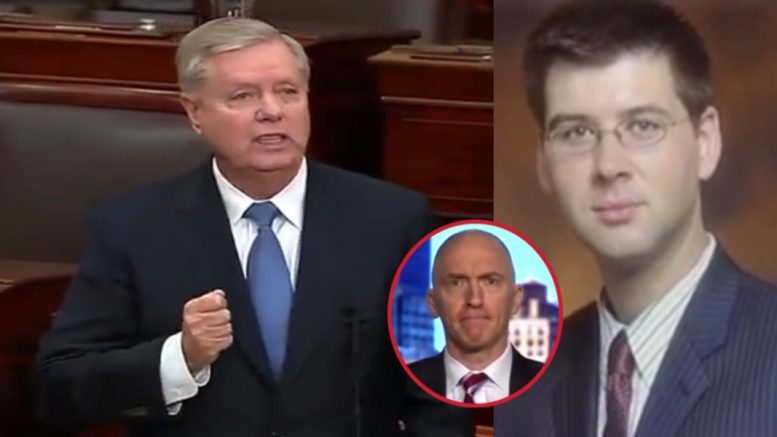 Former FBI lawyer Kevin Clinesmith was sentenced to 12 months probation and 400 hours of community service Friday after pleading guilty to making a false statement in the first criminal case arising from Special Counsel John Durham’s investigation into the origins of the Trump-Russia probe, Fox News reported.

Clinesmith in August, pleaded guilty to “one count of making a false statement within both the jurisdiction of the executive branch and judicial branch of the U.S. government, an offense that carries a maximum term of imprisonment of five years and a fine of up to $250,000.”

Kevin Clinesmith was referred for potential prosecution by the Justice Department’s inspector general’s office, which conducted its own review of the Russia investigation. Specifically, the inspector general accused Clinesmith, though not by name, of altering an email about former Trump campaign adviser Carter Page to say that he was “not a source” for another government agency.

Page has said he was a source for the CIA. The DOJ relied on that assertion as it submitted a third and final renewal application in 2017 to eavesdrop on Page under the Foreign Intelligence Surveillance Act, as previously reported by Swamp Drain.

In a report made public in December 2019, Department of Justice Inspector General Michael Horowitz listed more than 17 significant inaccuracies and omissions with the FBI’s Crossfire Hurricane probe into Trump’s campaign. The malfeasance appeared to occur during the FBI’s application for a Foreign Intelligence Surveillance warrant on Carter Page.

to 12 months of probation, 400 hours of community service within that year, $100 special assessment. CONTEXT: While in 2016 + 2017 Page was accused of being an agent for Russia, FBI/DOJ had records that showed Page had SUPPORTED US national security by assisting the CIA. @CBSNews

Senator Lindsey Graham (R-SC), who led investigations into the Russia probe in the Senate Judiciary Committee, responded Friday on Twitter to the announcement of Clinesmith’s’ sentencing.

“This punishment trivializes what I believe to be a stunning breach of duty to the Court and to the American people. Lawyers in the chain of prosecution altering documents – to mislead the Court – is one of the most damning things that can be done to the Rule of Law,” he said.

“They clearly altered documents and withheld exculpatory information from the FISA Court to continue a false narrative against an American citizen: Carter Page. This sentence will only further erode the American people’s confidence in DOJ and FBI, after they took the law into their own hands,” Graham wrote.

Lawyers in the chain of prosecution altering documents – to mislead the Court – is one of the most damning things that can be done to the Rule of Law.

This sentence will only further erode the American people’s confidence in DOJ and FBI, after they took the law into their own hands.

(Related: Trump Reacts To Ex-FBI Lawyer Clinesmith Who’s Expected To Plead Guilty: “They Spied On My Campaign & They Got Caught”)