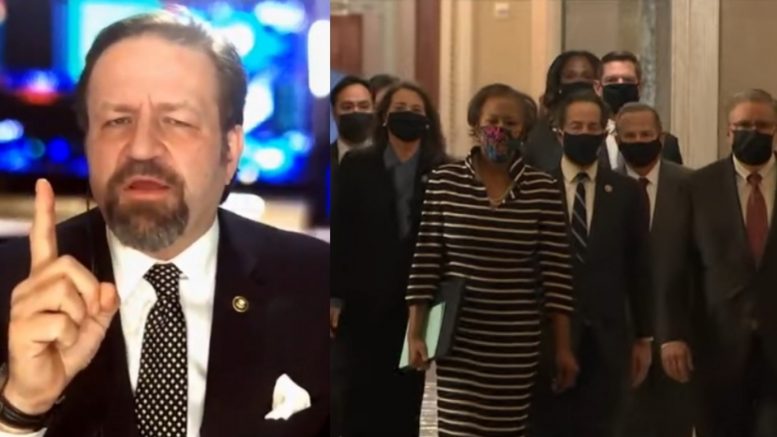 Sebastian Gorka thinks the pending impeachment trial of Donald J. Trump is nothing more than a “sham” and a “disgrace” that will ultimately make the 45th President “more powerful than he has ever been” when all is said and done.

Gorka pointed out “peculiar” events and a lack of a smoking gun that he thinks makes it impossible to convict the former president of “incitement of insurrection,” which is alleged in Democrats’ single article of impeachment against Trump.

“The breach — the very peculiar breach where police officers, in some cases, opening the doors and waving people in and people walking through the velvet rope corridor…very strange — that occurred 40 minutes before the President finished his speech. How is he inciting anything?” Gorka questioned during an interview on Just The News. “You can’t incite something that’s already happening.”

Mr. Gorka went on to reveal, what he considers to be, the “biggest anti-smoking gun” regarding Democrats’ impeachment case.

“If Donald Trump haf incited anybody to violence, what would be playing on a loop for the last three weeks on CNN, MSNBC, ABC?,” he contemplated. “It would have been a clip of ‘Go and storm the Congress!’ Well, there wasn’t a ‘Go and storm the Congress!’ clip. Cause what he said was, ‘You’re going to peacefully and patriotically march to Congress.'”

“So the whole thing is a sham, it’s a disgrace and it’s going to make Donald Trump — the private citizen — more powerful than he has ever been,” Gorka declared. Video Below

.@SebGorka says @SpeakerPelosi's impeachment of Donald Trump is a "sham" and "disgrace" that will make him more powerful than he's ever been.@EricGreitens pic.twitter.com/Gb2goMrjpC