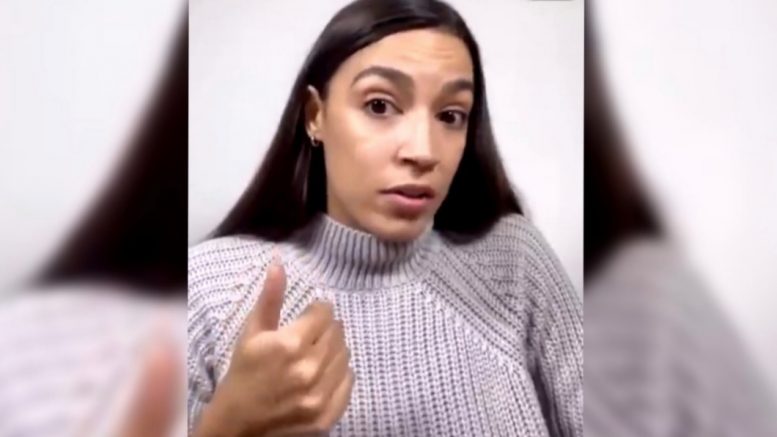 Rep. Alexandria Ocasio-Cortez alerted her supporters to report any post with a hashtag that criticizes her account of the Capitol Building riot.

The #AlexandriaOcasioSmollett hashtag campaign was started on Twitter following reports that she was not in the U.S. Capitol Building, but in her office at the nearby Cannon Office Building when a riot broke out on January 6th.

Related Article: AOC Gets Blasted On Twitter As Her Location During The Capitol Riot Gets Pulled Into Question

The New York congresswoman sent out an email urging her readers to “force Twitter and Facebook to take action and enforce their own rules” by reporting any posts with “the trending hashtag” as well as any other posts “spreading the misleading information.”

She then asked that her supporters not retweet any of the hashtags because “we don’t want to spread them further.”

Jack Posobiec retrieved a copy of the email and posted it to Twitter. See Below

Rep. Ocasio-Cortez’s Email To Her Supporters 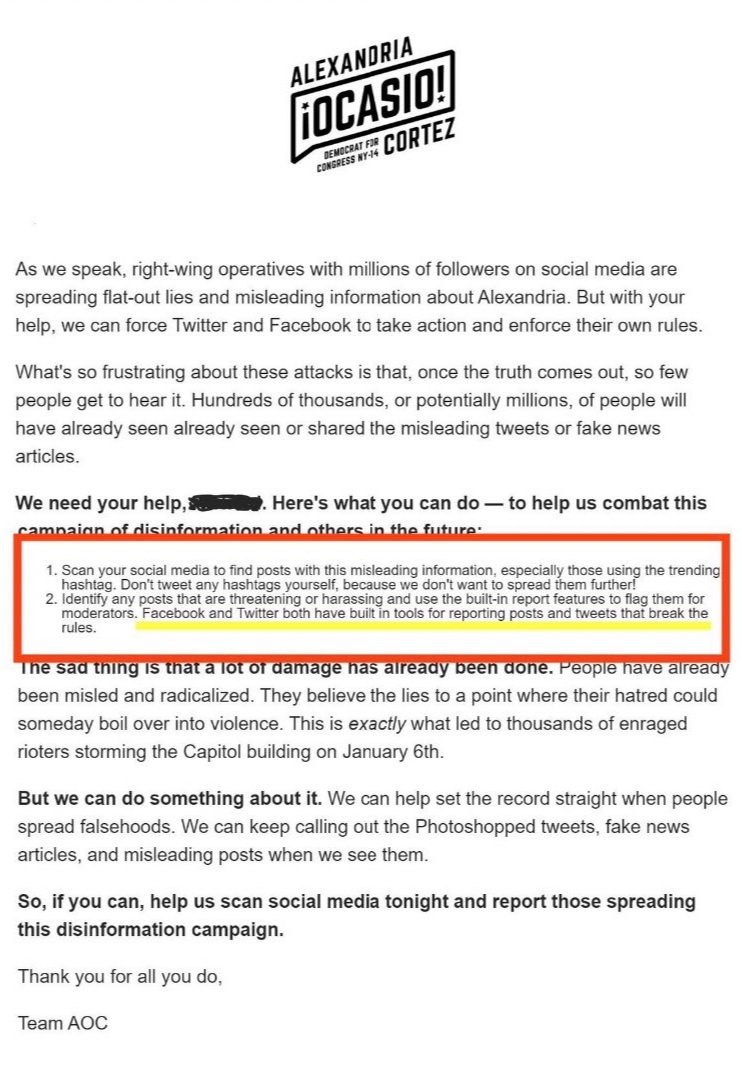 Twitter was rocked into a frenzy after Rep. Ocasio-Cortez posted a selfie-video of herself on Instagram describing a run-in she had with a police officer at her office on January 6th, which is not located inside the Capitol Building that was breached by rioters.

According Fox News, the New York congresswoman’s office is located in the Cannon building, which is on the Capitol complex, but is not in the Capitol itself.

In her video — that was posted days after she accused Senator Ted Cruz of attempted murder –Ocasio-Cortez recalled how she hid in a bathroom and “thought” she was “going to die.” She then described the moment when an officer bursted into her office, but his presence “didn’t feel right” and that he was looking at her “in all of this anger and hostility.” She went on to say that her staffer wondered if he would have to fight the officer.

.@AOC describes a Capitol Police officer bursting into her office, says his presence “didn’t feel right” and that he was looking at her “in all of this anger and hostility.” Her staffer reportedly wondered if he would have to fight the officer. pic.twitter.com/LCj2JmmFP6

This was one of the most heartbreaking moments of AOC’s IG live pic.twitter.com/BumKbriwmy

Ocasio-Cortez’s recollection of her experience was picked up by news outlets, which then twisted the information as if rioters, not the police officer, were the ones entering her office. Rep. Nancy Mace (R-SC), who has an office in the same hall as AOC, debunked such claims.

.@AOC made clear she didn’t know who was at her door. Breathless attempts by media to fan fictitious news flames are dangerous.

My office is 2 doors down. Insurrectionists never stormed our hallway. Egregious doesn’t even begin to cover it. Is there nothing MSM won’t politicize? pic.twitter.com/Tl1GiPSOft

As reports of AOC’s whereabouts during the riots circulated, the hashtag #AlexandriaOcasioSmollett became one of the top trends on Twitter, where users of the social media platform likened her to disgraced actor Jussie Smollett.

But the comparison didn’t come without a reaction from Ocasio-Cortez, who posted the following response before sending out the email for her supporters to take action:

This is the latest manipulative take on the right.

They are manipulating the fact that most people don’t know the layout the Capitol complex.

We were all on the Capitol complex – the attack wasn’t just on the dome.

The bombs Trump supporters planted surrounded our offices too. pic.twitter.com/jI18e0XRrd