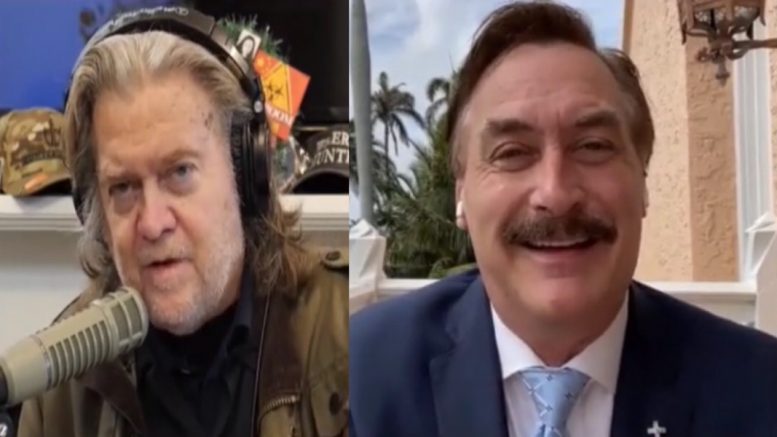 Last month, Mike Lindell, the CEO of MyPillow, dared Dominion Voting Systems to take legal action against him after the company reportedly threatened to sue him over claims that their technology rigged the 2020 election in favor of Joe Biden, The Freedom Times reported.

A cease and desist letter from Dominion that was written on December 23rd warned Lindell that “litigation” is “imminent” if he does not stop his role in “the ongoing misinformation campaign.”

As per the Washington Examiner, a key portion in the letter from Dominion reads, “You have positioned yourself as a prominent leader of the ongoing misinformation campaign. Litigation regarding these issues is imminent.”

“That letter is two weeks old, it’s a letter telling me to apologize. It’s a joke,” Lindell told the Washington Examiner in January. “Those machines are set to rig elections. If Dominion wants to sue me, I welcome it.”

He went on to suggest that the company was holding back from a lawsuit “because we have all the evidence of foreign interference”, adding, “Please sue me. Apparently, nobody wants to see the evidence in the midst of this election fraud. I want everybody to see the evidence. We dare the Supreme Court to at least open it up and look at it. Do your job. This isn’t about who is going to be president. This is about an attack on our country.” Continued Below

Following his two hour long documentary release over alleged election fraud, titled “Absolute Proof”, which is being aired throughout the weekend on OANN and on his website MichaelJLindell.com, the MyPillow CEO told Steve Bannon on Saturday that he will sue Dominion and Smartmatic for “crimes against our country”.

“Dominion has not sued me. I don’t even think they’ve threatened to sue me,” Lindell told Bannon. “They send me letters [saying], ‘Mike, in your documentary, a few of these people in there– this isn’t real. Let us know who’s gonna be in your documentary’. … And then I got the other letter that said, ‘You have been warned’. You know, like [it’s] some mafia letter, like back when I was a kid.”

“They haven’t sued me, Steve. Here’s the deal: I will take them, you’re exactly right. Bring the media there. I don’t care how long; I’ll sit there for a week with ya. … I am going after Dominion and Smartmatic. I’m going after them with a lawsuit, if this doesn’t all come out to the public and they all get exposed and show what happened in our election,” Lindell warned. Video Below

“It’s going to get out there or my next step is I sue Dominion. And when I sue Dominion, then it has to come out in court. And I’ll make sure that that’s public. You either do it now, or let’s just do it now and save time,” the MyPillow CEO said. “How bout it Dominion? How bout it?”

“I actually have lawyers looking at that right now at what can be charged. In fact, Steve, the next time I’m on your show, I guarantee I’ll have those charges against Dominion,” he informed the “War Room Pandemic” host.