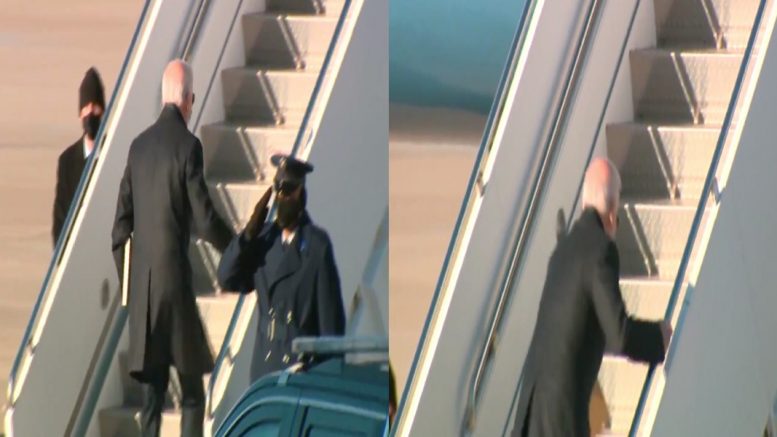 Joseph Robinette Biden Jr. departed Delaware’s New Castle Air National Guard Base to head back to Washington DC. after spending the weekend in Delaware to reportedly see his grandchildren and hang out with his wife Jill.

As Biden was walking up the steps to Air Force One, the 78 year old alleged president was holding on to the hand rail and appeared to misstep, catching himself before possibly tripping.

Joe Biden stumbles while walking up the stairs to Air Force One:

Last summer in June, the leftwing media had a field day when the 45th President slowly walked down a ramp at West Point after congratulating cadets and shaking every hand.

The hashtags “TrumpIsUnwell” and “TRUMPstroke” were trending on Twitter at the time of the video clip circulating on social media.

The former President wrote on Twitter after media and Democrats mocked him, saying, “The ramp that I descended after my West Point Commencement speech was very long & steep, had no handrail and, most importantly, was very slippery. The last thing I was going to do is ‘fall’ for the Fake News to have fun with. Final ten feet I ran down to level ground. Momentum!” Video Below

President Trump walking down a ramp at West Point:

Trump descended a ramp extremely carefully at the end of his West Point speech today pic.twitter.com/uMG3KyB1V1

A simple search on leftwing Google shows how the media made a “big deal” over the 45th President walking down the ramp slowly and extensively covered it. Here are a few screenshots:

A google search for Joe Biden stumbling on the stairs, however, comes up short. Where is the media’s concern over Biden’s health as they extensively wondered for former President Donald Trump? We won’t hold our breath waiting to see if the mainstream media covers this story.

(Related: Biden: “There’s Nothing We Can Do To Change The Trajectory Of The Pandemic In The Next Several Months”)