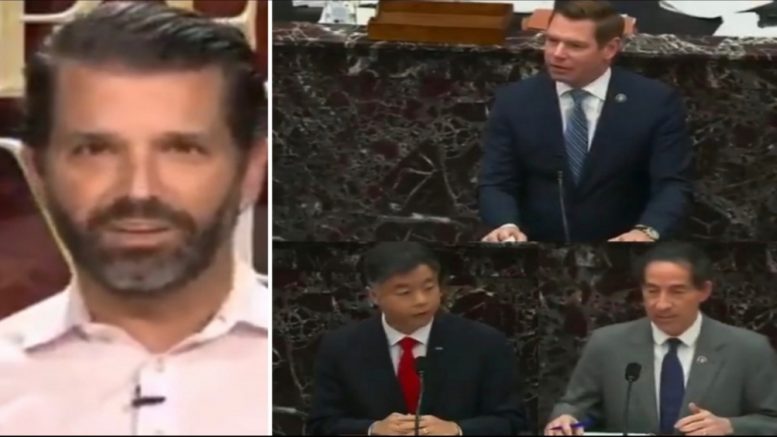 On Wednesday’s airing of Spicer & Co., Donald Trump Jr. slammed Democrats over double standards that he has seen play out thus far over the course of Impeachment 2.0.

In reference to Democrats editing out the “major part” of his father’s January 6th speech where he tells supporters “peacefully” make their voices heard, Trump Jr. said, “The facts tend to elude the Democrats, and when you have a mainstream media complex that’s willing to carry their water for them…they will allow them to get away with it.”

“They will pretend as though it didn’t exist, even though it’s literally part of the same sentence,” he added.. “You have seen this play out in real life. They do it all the time. It doesn’t matter.”

Don Jr. exposed another double standard when he brought up that one of the central quotes Democrats have been focusing on during the impeachment trial is when President Trump said “fight like hell” in his January 6th speech.

Trump Jr. pointed out that many prominent Democrats, including House impeachment managers Jamie Raskin, Eric Swalwell and Ted Lieu,  are all on record uttering the same phrase.

“If they wanted to impeach every member of Congress who ever used the words ‘Fight like hell’ in a stump speech, there would be no one left in D.C., which may be a great start, but I have a feeling they’re only going to prosecute it one way,” Trump Jr. declared.

Don Jr. then mentioned Democrats have been quick to point the finger at President Trump for ‘inciting’ the Capitol riot, yet had been silent for over 10 months when leftwing riots broke out across the country and destroyed major cities.

“We’ve all denounced what happened on January 6th. That doesn’t mean that then by their rules that they would be absolved by 10 months of January 6th that happened across the entire country. Right? Federal buildings were stormed,” Trump Jr. said. “You had everything else all insurrected by the Democrats by their rhetoric on TV, yet that doesn’t seem to be a problem.”  Video Below