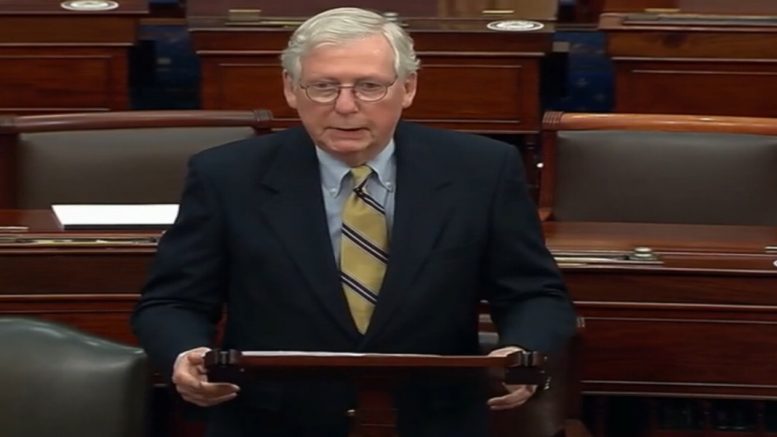 Although McConnell voted to acquit the former president of the impeachment charge against him, the Senate minority leader claimed that Trump’s actions after the presidential election were “unconscionable” and foreshadowed that Trump still could face accountability for his actions in criminal courts.

“There’s no question… that President Trump is practically and morally responsible for provoking the events of the day,” Senator McConnell claimed. “The people who stormed this building believed they were acting on the wishes and instructions of their president. And having that belief was a foreseeable consequence of the growing crescendo of false statements, conspiracy theories and reckless hyperbole which the defeated president kept shouting into the largest megaphone on planet Earth.”

He alleged: “These criminals were carrying his banners. Hanging his flags and screaming their loyalty to him. It was obvious that only President Trump could end this… Former aides publicly begged him to do so. Loyal allies frantically called the administration. The president did not act swiftly. He did not do his job… Instead according to public reports he watched television happily as the chaos unfolded, kept pressing his scheme to overturn the election.”

McConnell, however, said that the Senate could not vote to convict the 45th President because of the constraints placed on it by the Constitution.

“I believe the best constitutional reading shows that Article II, Section 4 exhausts the set of persons who can legitimately be impeached, tried or convicted,” Senator McConnell said. “It’s the president, the vice president and civil officers. We have no power to convict and disqualify a former officeholder who is now a private citizen.” Continued Below

But McConnell foreshadowed that Trump still could face accountability for his actions in criminal courts. Indeed, there is a criminal investigation in Georgia into whether Trump broke any laws with his phone call to Georgia Secretary of State Brad Raffensperger in which he asked Raffensperger to “find” enough votes to hand the state to Trump, reported Fox News.

“President Trump is still liable for everything he did while in office,” McConnell claimed. “He didn’t get away with anything yet. We have a criminal justice system in this country. We have civil litigation.”

McConnell added that the Senate’s decision to convict Trump does not say that the Senate endorses Trump’s actions, but that “it simply says that senators did what the former president failed to do. We put our constitutional duty first,” per Fox News. Video Below

JUST IN: Sen. Mitch McConnell: Former Pres. Trump "didn't get away with anything—yet."

"We have criminal justice system in this country; we have civil litigation. And former presidents are not immune from being accountable by either one." https://t.co/z2HunrIbp6 pic.twitter.com/OLdlTKhuzh

McConnell, however, faced backlash after he berated former President Donald Trump following the second impeachment acquittal of the 45th President.

2) Pelosi’s reference to censure/stationary goes back to the Hse censuring fmr Dem NY Rep Charlie Rangel for a host of issues, including misuing Congressional resources, including official stationary

If only McConnell was so righteous as the Democrats trampled Trump and the Republicans while pushing Russia collusion bullshit for 3 years or while Dems incited 10 months of violence, arson, and rioting. Yea then he just sat back and did jack shit.

I am so angry with @LeaderMcConnell !!! He continues to prove he an arrogant swamp creature! Instead of thanking Pres. Trump and apologizing for the Senates behavior he chooses to take devious shots at him. Disgrace.

Mitch McConnell is a traitor and one of the dumbest people in Washington DC.

I would never consider voting for any Republican again, third-party only, as long as Mitch McConnell is in the Republican Party.

Remember when people told you that Mitch McConnell was a political genius? You can't believe that after hearing McConnell's post-impeachment speech.

He just said Trump was "guilty" 10 minutes after he voted to find Trump "not guilty."

Mitch McConnell is getting in his last shots at Trump right now, bloviating about his personal indignation over his rhetoric. But where was his indignation when his president was being FRAMED for 3 years for being a "Russian agent" compromised by Putin?Where was his outrage then?

Mitch McConnell hates Trump. We are all aware.

(Related: Michael van der Veen: “They Got Caught Doctoring The Evidence & This Case Should Be Over”)