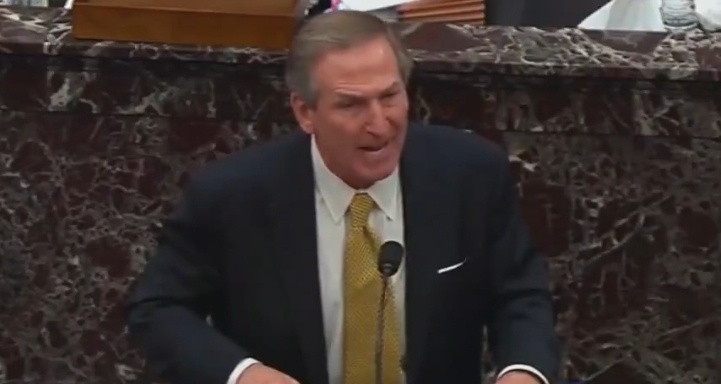 On Friday, Donald Trump’s defense attorney Michael van der Veen declared that the case against the 45th President “should be over” due to House impeachment managers getting caught “doctoring the evidence” that was presented over the first three days of the Senate trial.

Van der Veen made the suggestion following a presentation made by his legal teammate David Schoen just hours earlier where he demonstrated how Democrat impeachment managers manipulated tweets, mis-characterized words that written by Trump and selectively edited video to fit the allegations being made against the former president.

“Where I come from in Philadelphia, when you get caught doctoring evidence, your case is over. And that’s what happened. They got caught doctoring the evidence and this case should be over,” van der Veen told senators at Friday’s impeachment hearing.

Below are several tweets that break down what was presented by Schoen:

Senator @ericswalwell gets schooled by Trump's lawyers on the difference between cavalry and calvary. Oops. pic.twitter.com/oV4zKwggAC

BREAKING: Democratic Impeachment Managers explain that they had to recreate tweets because Twitter had deleted the President's account. pic.twitter.com/5kyxFMUgvx