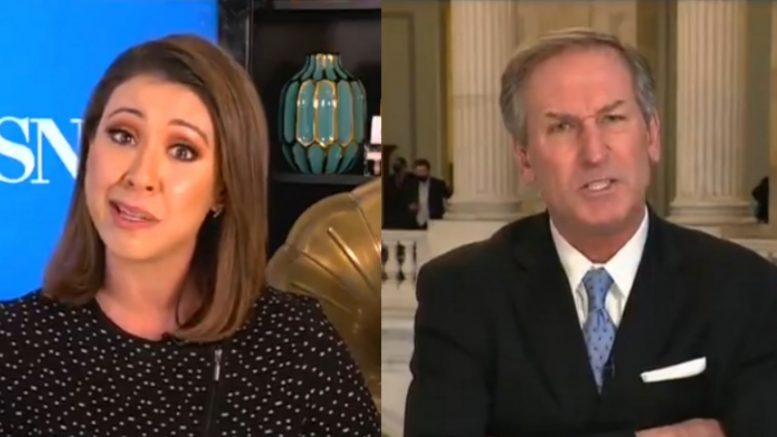 The drama started when van der Veen stated that evidence was “doctored” based on earlier claims that a tweets was manipulated and video footage was selectively edited by House impeachment managers to fit their case against Trump.

“They did not investigate this case and when they had to come to the court of the Senate to put their case on, because they hadn’t done any investigation, they doctored evidence,” van der Veen said in his CBS interview. “It was absolutely shocking when we discovered it and we were able to expose it and put it out. It think it turned a lot of senators.”

Lana Zak followed up and said: “To be clear for our viewers, what you’re talking about now is a checkmark that’s a verification on Twitter that did not exist on that particular tweet, a 2020 that should have actually read 2021, and the ‘selective editing,’ you say, of the tapes — Is that the doctored evidence of which you’re speaking?”

“That’s not enough for you?!” van der Veen replied.

Van der Veen then fired back as follows:

“The media has to start telling the right story in this country. The media is trying to divide this country. You are blood-thirsty for ratings. And in such, you are asking questions that are already set up with a fact-pattern. I can’t believe you would ask me a question indicating that it’s alright to just doctor a little bit of evidence. There’s more stuff that we uncovered that they doctored, to be frank with you. And perhaps that will come out one day. But we won this case.

“But what should happen is somebody should look at the conduct of these House managers. It’s unconscionable aside from all of the due process violations that my client had. And the media should be looking [at] that in a square, straight way!

“When I watch the news, I watch one station and it’s raining. I watch another station at the same time and it’s sunny. Your coverage is so slanted, it’s gotta stop. Youl guys have to stop and start reporting more like PBS does rather than a TV news show that doesn’t have any journalistic integrity at all.

“What I’m telling you is that they doctored evidence. And I believe your question says ‘Well, it’s only a Twitter check and changing a year of a date here.’ They switched the date of a Twitter a year to try to connect it to this case. That’s not a small thing, ma’am. The other thing they did is put a check mark on something to make it look like it was a validated account, when it wasn’t. And when they were caught, they didn’t say anything about it! They didn’t try to come up with an excuse about it. And that’s not the way our prosecutors or our government officials should be conducting themselves. And the media shouldn’t be letting them get away with it.”

“I’m tired of the biased media on both sides — left and right. What this country wants, what this country needs is this country to come together — to take the left and the right, to find a middle ground and start responsibly being our republic officials…our elected officials. And one of the reasons why they do it is because of the media. Because the media wants to tell their narrative rather than just telling it like it is.” Video Below