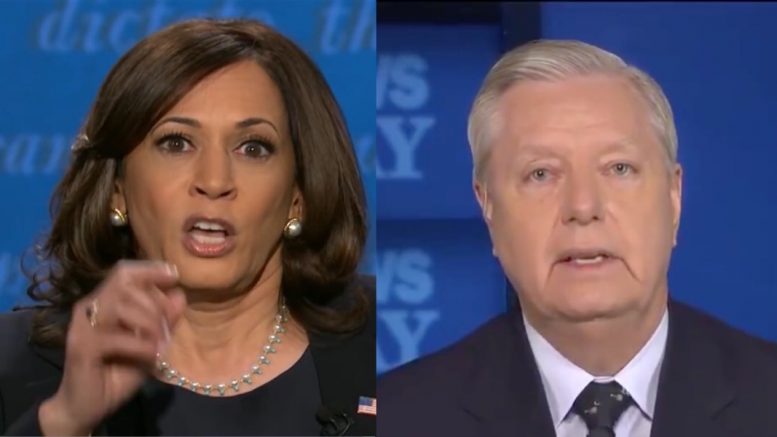 “The trial was not only unconstitutional; I condemn what happened on January 6. But the process they used to impeach this president was a front to rule of law. He’s the first president to ever be impeached without a lawyer, without a witness, without ability to confront those against him,” Graham said of the impeachment trial against former President Donald Trump.

“And the trial record was a complete joke, hearsay upon hearsay. And we’ve opened Pandora’s box to future presidents,” Senator Graham warned.

“If you use this model, I don’t know how Kamala Harris doesn’t get impeached if the Republicans take over the House, because she actually bailed out rioters. And one of the rioters went back to the streets and broke somebody’s head open. So we’ve opened Pandora’s box here, and I’m sad for the country,” he said.

Senator Graham was referring to when Kamala Harris posted on Twitter June 1, 2020, “If you’re able to, chip in now to the @MNFreedomFund to help post bail for those protesting on the ground in Minnesota”.

In addition to Harris, numerous Biden staffers promoted the Minnesota Freedom Fund during the George Floyd riots. According to a Reuters report, “At least 13 Biden campaign staff members posted on Twitter [last summer] that they made donations to the Minnesota Freedom Fund, which opposes the practice of cash bail, or making people pay to avoid pre-trial imprisonment. The group uses donations to pay bail fees in Minneapolis.” Video Below

SEN. LINDSEY GRAHAM: "I don't know how Kamala Harris doesn't get impeached if the Republicans take over the House, because she actually bailed out rioters" pic.twitter.com/hoitBgrkXJ

If you’re able to, chip in now to the @MNFreedomFund to help post bail for those protesting on the ground in Minnesota. https://t.co/t8LXowKIbw

Kamala Harris also posted a video of herself last summer with protesters:

People are in pain. We must listen. pic.twitter.com/5PJ9gqyu1q

Timothy Wayne Columbus, a 36-year-old-man, is charged with first-degree criminal sexual conduct for allegedly penetrating a girl in 2015 when she was about 8 years old. A warrant was issued for his arrest on June 25. But he was later bailed out of jail and according to a court document, filed to have his bail money returned to Minnesota Freedom Fund (MFF), the organization Harris and many Biden staffers asked their followers to donate to during the rioting in Minneapolis.

FOX 9 reported last summer that MFF had raised $35 million in the wake of George Floyd’s death in the custody of the Minneapolis Police Department. A recent update on its website indicates that it has spent at least $3,475,000 bailing people out of jail in recent months, with just $210,000 of that being spent bailing out protesters and rioters who were arrested in the unrest immediately following Floyd’s death.

FOX 9 also first exposed some of the non-protesters being bailed out by MFF, including Darnika Floyd, who was charged with second-degree murder after allegedly stabbing a friend to death, and Christopher Boswell, who is facing charges of sexual assault and kidnapping. The group put up $100,000 on behalf of Floyd and $350,000 on behalf of Boswell.

Boswell had previously been convicted twice on sexual assault charges and was prosecuted by Sen. Amy Klobuchar, D-Minn., when she was the Hennepin County attorney.

(Related: Kamala Gushes Over Romney After He Was Seen Marching With Protestors: “You Gotta Give It To Mitt”)