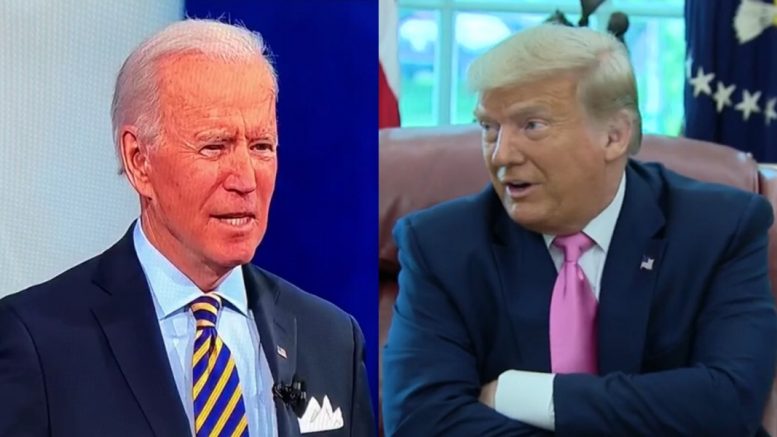 Former President Donald Trump spoke to host Greg Kelly on Newsmax Wednesday, weighing in on several topics since leaving office and following his recent acquittal in the Senate.

Kelly, during the interview, wondered if the 45th President “caught Biden on the CNN Townhall” that aired Tuesday evening, prompting Trump to to blast Biden over his coronavirus vaccine remarks.

Joe Biden, during a CNN Townhall on Tuesday, falsely claimed that his administration did not have a vaccine to work with when he came into office, as previously reported by Swamp Drain.

On December 11, 2020, the U.S. Food and Drug Administration issued the first emergency use authorization (EUA) for a vaccine for the prevention of coronavirus disease 2019 (COVID-19) caused by severe acute respiratory syndrome coronavirus 2 (SARS-CoV-2) in individuals 16 years of age and older. The emergency use authorization allows the Pfizer-BioNTech COVID-19 Vaccine to be distributed in the U.S., FDA.gov reported. Continued Below

The 45th President told Greg Kelly of Biden’s remarks over the vaccine, “I saw that he said that there was no vaccine when he came into office, yet he got a shot before he came into office. And it was already in early November that we announced it. But we actually had it substantially before that. And we were giving millions of shots, millions of doses”.

“So he was either not telling the truth or he’s mentally gone; one or the other. And he’s getting actually– Joe Biden’s getting killed on that whole thing, because even the haters said, ‘Well, wait a minute. You know this vaccine was announced long before’– and I believe he got the shot sometime before January 20th, which was Inauguration Day– long before January 20th,” the former president explained, blasting the current occupant in the White House.

“Literally, quote, ‘I had no vaccine when I came into office’, meaning when he came into office”, Trump said. “He is getting lit up on that one, [be]cause even the bad ones, even the ones who aren’t exactly fans [of Trump] are saying, ‘That was a bad statement'”. Video Below

“Let’s give him the benefit of the doubt. Could he be joking?” President Trump asked. “Because frankly, that was a very dumb statement.”

Donald Trump says President Biden is "either not telling the truth, or he's mentally gone" based on his vaccine statements. @gregkellyusa https://t.co/VlT7z8drtO pic.twitter.com/mD7rPh39HR

(Related: Biden: “It’s One Thing To Have The Vaccine, Which We Didn’t Have When We Came Into Office, But A Vaccinator”)