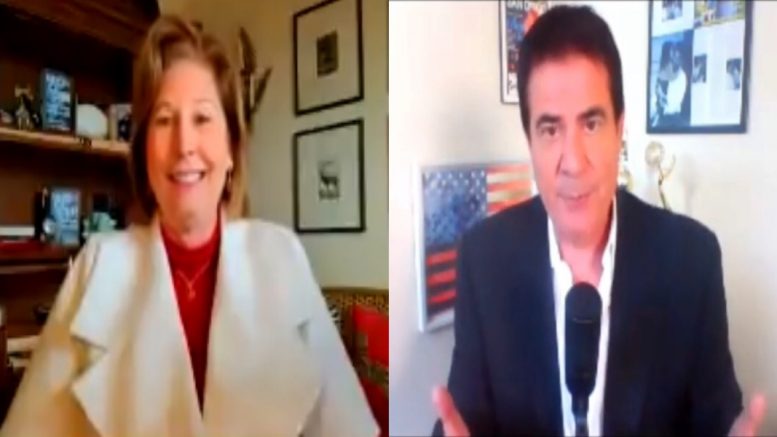 During an interview last week on “The Ledger Report”, attorney Sidney Powell told host Graham Ledger, “discovery is gonna be devastating” against Dominion Voting Systems in a court battle.

Last month, Dominion Voting Systems filed a defamation lawsuit against attorney Sidney Powell for claiming that the voting machine company rigged the 2020 presidential election for Joe Biden by manipulating votes. Dominion is seeking $1.3 billion in damages and an order from the court for Powell to cease making false statements about it, reported The Freedom Times.

“The lawsuit you’re facing– I know you’re limited about what you can speak in terms of the Dominion, and we know what you’ve been saying is accurate, because I have verified it. I have checked it out. We know the origins are [from] Venezuela. We know it’s a corruptible, manipulatable, malleable piece of machinery and software,” Graham Ledger claimed.

Ledger added: “Again, I know you’re restrained and constrained in many areas about what you can speak about, but when this initially happened and people were attacking you, I said to them, ‘You know, there’s this crazy thing called discovery in the process of lawsuits.’ And I said, ‘What if this is exactly … what Sidney Powell wanted all along so she could begin discovery and get to the truth?'”

Sidney Powell responded, “Yes. I can’t wait to take the deposition of Eric Coomer and other Dominion executives and people on the ground in Atlanta and the high executive of Dominion, who was in Detroit on the night of the election, running the Dominion operations there.”

“There were Dominion people everywhere doing all this–Tom Feehan in Georgia. Lots of people that need to be deposed in the process of this litigation,” Powell said. “We can’t wait to get at it.” Continued Below

Asked if she sees herself as an attorney piecing this thing together, not only for trial purposes, but for the American people to have a clear picture of what transpired, Powell replied, “Oh, yes. That’s why we started DefendingtheRepublic.org to peruse the litigation needed on behalf of the American people, because our justice department has failed to do it’s job, among every other institution in our government right now to expose the truth and prosecute the actual crimes that occurred.”

Ledger also wondered, “Is this gonna be one of these cases that drag out for years and years and years, maybe even beyond 2024? How do you see this thing playing out in terms of any kind of time frame?”

Powell responded, “I don’t think it’s gonna take all that long, Graham, because the discovery is gonna be devastating”. Video Below

Meanwhile, the U.S. Supreme Court on February 5th, scheduled several high-profile contest-of-election lawsuits, including ones brought by attorneys Sidney Powell, Lin Wood, and the Trump campaign, for consideration at its February 19 conference.

(Related: Sidney Powell Provides An Update Regarding “Active” Legal Cases: “Federal Law Requires All Records To Be Kept For 22 Months”)