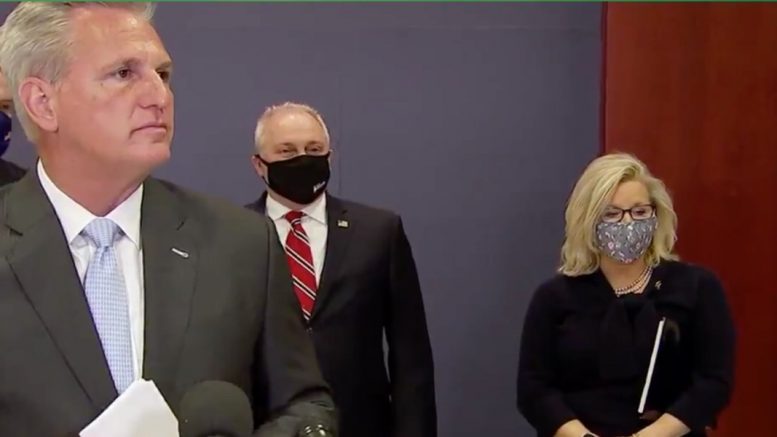 When asked by a reporter whether Trump should speak at CPAC, McCarthy quickly replied, “Yes, he should”, which is scheduled to take place in Orlando, Florida this weekend. It will be the 45th President’s first public political speech since leaving office.

Liz Cheney, however, disagreed with Kevin McCarthy, voicing her position over the former president after she voted to impeach him.

“That’s up to CPAC,” Cheney said. “I’ve been clear about my views about President Trump and the extent to which, following January 6, I don’t think he should be playing a role in the future of party or the country.”

The House minority leader wrapped the press conference by quipping, ”On that high note, thank you very much.”

Cheney’s earlier rebuke of Trump has led to pushback from some Republicans in the Party, with a group of conservatives unsuccessfully attempting to oust her from her leadership position earlier this month. Her critics argue that her views don’t represent the majority of the party. Video Below

Q: Do you believe former President Trump should speaking at CPAC?@GOPLeader: "Yes he should."@RepLizCheney: "That's up to CPAC….I don't believe that he should be playing a role in the future of the party or the country."

McCarthy: "On that high note, thank you very much." pic.twitter.com/ZOkTUbpQCP

Liz Cheney knows she can't get reelected in Wyoming because the people there hate her, so she's trying hard to make sure her new friends at CNN will hire her once she loses her primary. #LincolnProjectLiz is less popular with Republicans than Andrew Cuomo is at nursing homes!!! https://t.co/IBZkim3YgI

Liz Cheney has no credibility with me. https://t.co/bCe4KiVjTU

Liz Cheney is going to fit right in on The View after she loses her primary by 30 points in 2022.

Don't nobody give a zuck about what Liz Cheney thinks. She can keep her opinions to herself!

Liz Cheney should not be embraced by the Republican Party

Kevin McCarthy can say whatever he wants, but he defended Liz Cheney and kept her on his leadership team.

He’s not on President Trump’s side & he’s not America First.

I will help primary Liz Cheney,

Liz Cheney has no role going forward in the Republican Party.

Not a word from weak Kevin McCarthy. He just let Liz Cheney trash our President and didn’t say a single word. https://t.co/iIudE9pSED

(Related: Rep. Greene Fires Back As Liz Cheney Claims Trump “Does Not Have A Role As Leader Of Our Party Going Forward”)