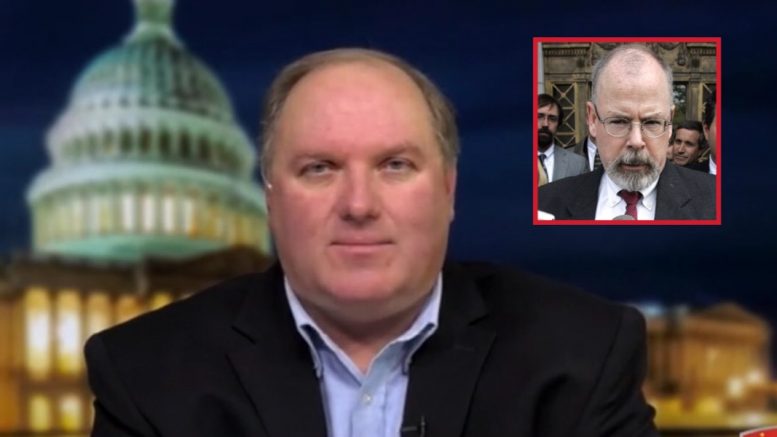 Investigative journalist John Solomon reported that Special Counsel John Durham is “in the final phases” of his investigation and speculated “we’ll know by next month” whether there will be any charges.

Before resigning in December, former Attorney General William Barr gave extra protection to U.S. Attorney John Durham– the prosecutor he appointed to investigate the origins of the Trump-Russia probe, giving Durham the authority of a special counsel to complete his work without the risk of easily being fired.

“They are making final negotiations with witnesses. They’re brining in people to tighten stories and lay down a final timeline,” John Solomon told host Steve Bannon on Thursday during “War Room Pandemic”.

“They will make a decision, I believe, next month. That’s the timeline most lawyers and defendants– cooperating witnesses are being told. They’ll make a decision probably some time next month whether to bring charges. They’re looking at a very small group of people; three to five people at the top of the FBI for possibly misleading the FISA Court, engaging in a conspiracy to Congress and the FISA Court,” he predicted.

“We’ll know by next month. If it doesn’t happen next month, you can roll up your camp and go home and realize that everybody escaped accountability for one mid-level lawyer, [Kevin Clinesmith],” Solomon said.

Rep. Matt Gaetz (R-FL) asked Solomon: “John, are your sources telling you that it’s just leadership at the FBI that has something to be concerned about with this decision about charges? Or do you think there are also people at State [department], at CIA, folks from the Obama White House? … I’m concerned about the reporting. I’ve heard that these guys have all been told they’re in the clear. And based on my review information from the standpoint in the Judiciary Committee, they were all tied in on it.” Continued Below

“They all were [tied in on it]. They’re all in the clear as far as Durham is concerned,” Solomon claimed. “This is really based on some agents and some supervisors at the FBI that were center of this investigation.”

“But a lot of the other people do not appear to be in jeopardy based on my conversations with lawyers with what I’m learning. You’re right, Matt. There’s a lot of culpability to go around. We’re gonna be lucky to get some accountability,” he added.

Gaetz replied, “That means on its best day with most opportunity, the Durham investigation is not a decapitation strike, because when these folks are able at the highest levels of our government to be able to go coerce other governments to do what would not be legal for our government to do, there is no amount of, sort of, weed whacking at the middle management level that is sufficient.” Video Below

John Solomon’s full remarks. His prediction over John Durham’s investigation begins at the 3:25 mark in the video.