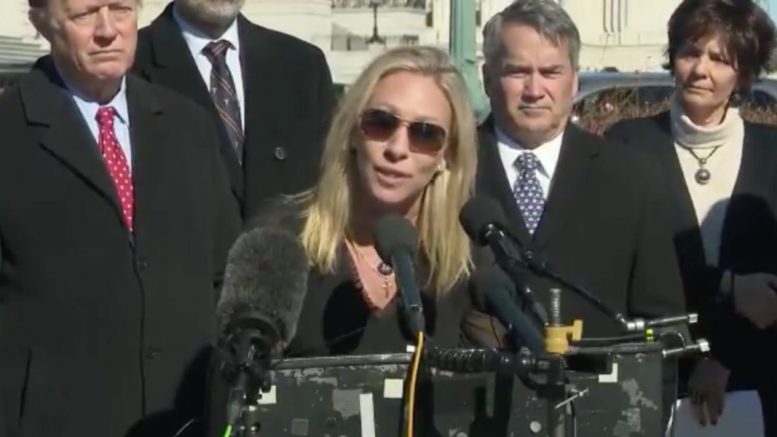 The conservative House Freedom Caucus called on Rep. Liz Cheney (R-Wyo.) to resign after she made comments Wednesday saying former President Donald Trump should not have a leadership role in the GOP moving forward, The Epoch Times reported.

“She should step down,” Rep. Andy Biggs (R-AZ) told news outlets on Thursday during a press conference. Rep. Chip Roy (R-TX) also asserted that Cheney “forfeited her right” to be the chairwoman for the Republican Caucus.

In a vote several weeks ago, Republicans again chose Cheney to be the No. 3 House Republican, coming after she voted to impeach Trump. On Wednesday, Cheney broke with House Minority Leader Kevin McCarthy (R-Calif.) during a news conference when they were asked about Trump’s scheduled speech at the Conservative Political Action Conference (CPAC) this weekend, The Epoch Times reported.

McCarthy expressed, “Yes, he should”, while Cheney said: “That’s up to CPAC … I don’t believe that he should be playing a role in the future of the party or the country,” as previously reported by Swamp Drain.

Rep. Marjorie Taylor Greene (R-GA) also pushed back at Cheney on Thursday, suggesting that the House Republican conference chair is a “fool”.

“The Republican Party would be much better off with people that want to move on past 75 million Republican voters that voted for President Trump,” she stated.

“I can’t wait for his speech at CPAC on Sunday. It’s going to be great, it really is. It’s going to be good to hear from him again because he’s been canceled. And that’s wrong. Everyone in this country should be against people being canceled. But you know, the left is okay with it as long as it fits their politics and fits their narratives. But you’re not gonna cancel President Trump. We’ll be happily hearing from him on Sunday. You’re not going to cancel the American people,” Rep. Greene added. Video Below

Rep. Marjorie Taylor Greene: "Liz Cheney and any other Republican that wants to make statements against President Donald Trump is a fool." pic.twitter.com/lkGNLythqA

(Related: Cheney Faces Backlash After Saying ‘I Don’t Think [Trump] Should Be Playing A Role In The Future Of The Party Or The Country’)