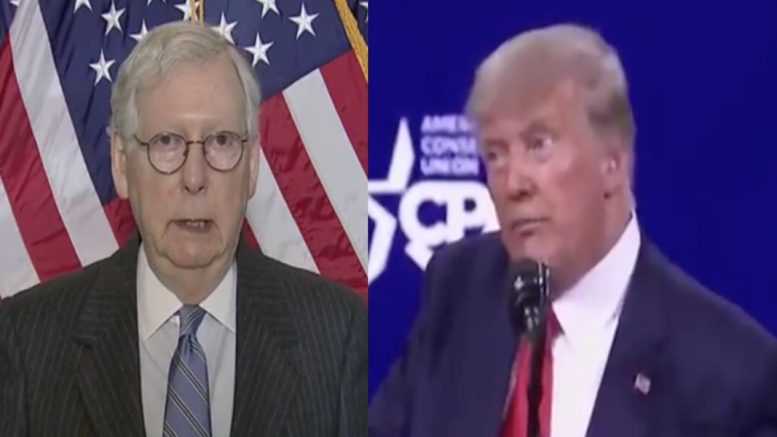 Senator Mitch McConnell (R-KY) on Tuesday appeared to mock former President Donald Trump for claiming that he had helped propel the Senate minority leader to victory in 2020, telling a reporter that he was down 15 points in 2014 when he won without Trump’s help.

The 45th President did not directly attack McConnell during his CPAC speech, but said that his endorsement prompted McConnell to get re-elected in November election. Members in the audience at CPAC booed at the mention of McConnell’s name on Sunday.

“My endorsement of Mitch McConnell at his request, he asked for my endorsement,” President Donald Trump said during his CPAC speech. “Brought him from one point down to 20 points up and he won his race in the great state and the great commonwealth of Kentucky. He won it very easily. And I said, ‘I wonder if I’m doing the right thing here,’ but you know what, I did what I did.”

“But he went from one point down to 20 points up very quickly, immediately actually, and he won his race. If you compare that to his other elections, I’m sure you’ll see something interesting. But you know what, we got a Republican elected,” Trump added.

A reporter asked Senator McConnell on Tuesday: “Former President Trump this weekend, took a lot of credit for your re-election at CPAC. I’m wondering if you could respond to his commentary and also how you think his endorsement might impact 2022, especially if he endorses one of your Senators like Lisa Murkowski?”

McConnell smiled in response, mocking Trump: “I want to thank him for the 15-point margin I had in 2014 as well.” Video Below

Senator Mitch McConnell berated former President Donald Trump in remarks on the Senate floor last month following the acquittal of the 45th President. Although McConnell voted to acquit the former president of the impeachment charge against him, the Senate minority leader claimed that Trump’s actions after the presidential election were “unconscionable” and foreshadowed that Trump still could face accountability for his actions in criminal courts, as previously reported by Swamp Drain.

“There’s no question… that President Trump is practically and morally responsible for provoking the events of the day,” Senator McConnell claimed in part. “The people who stormed this building believed they were acting on the wishes and instructions of their president. And having that belief was a foreseeable consequence of the growing crescendo of false statements, conspiracy theories and reckless hyperbole which the defeated president kept shouting into the largest megaphone on planet Earth.”

The 45th President released a scorching statement soon after, slamming McConnell and naming the Senate minority leader as a “dour, sullen, and unsmiling political hack,”, adding that the GOP would “never again be respected or strong” with McConnell steering the wheel.

Senator Lindsey Graham (R-SC) called for an end to the dispute between Trump and McConnell, as reported by The Freedom Times.

“They are now at each other’s throat,” Graham told Fox News host Sean Hannity last month. “I am more worried about 2022 than I’ve ever been. President Trump is the most consequential Republican in the party. If Mitch McConnell doesn’t understand that, he is missing a lot. But my beef is not with Mitch McConnell, because he has the same policy views I do. My beef is that we need to knock this off.”

In a recent interview on Friday, however, McConnell was pressed on whether he would support former President Trump if he won the Republican nomination for president in 2024. McConnell said, “Absolutely”, The Freedom Times reported.