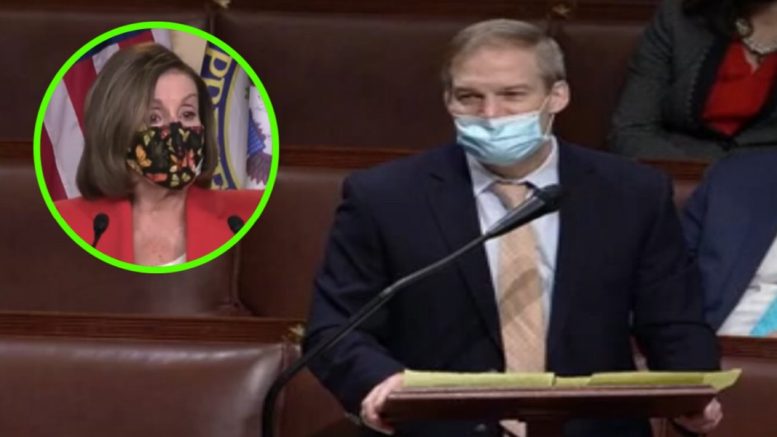 Ranking Member of the House Judiciary Committee Jim Jordan (R-OH) ripped Democrats on Tuesday for trying “to have it both ways” with their “800-page” election bill: H.R. 1 For the People Act, which includes a wide range of reforms in how Americans register to vote and cast their ballots in federal elections, as well as who can participate and how in campaigns for president, Senate, and the House of Representatives.

If H.R. 1 becomes law in its present form, according to critics, it will undermine constitutional liberties, while institutionalizing many of the registration and voting procedure changes made in 2020 in response to the CCP virus pandemic. Those changes produced one of the most bitterly contested presidential outcomes in U.S. history, reported The Epoch Times.

“Which is it?” Rep. Jim Jordan asked on the House floor Tuesday. “For three months Democrats told us the 2020 election was fine; there was no need for an investigation and that it was flawless.”

“But today, they tell us that they need to change the election law with an 800 page bill. Think about it: we need all this to fix a flawless election? Maybe something else is going on here,” Mr. Jordan said. “Last year COVID was the reason– was the pretext for making changes to the election law. Partisan courts, partisan secretary of states, went around legislatures in an unconstitutional fashion and changed election laws in some states, and now, they want to make sure those unconstitutional changes in a few states become the law in all states.”

“That’s what this is about,” Rep. Jordan speculated. “That’s what this is about. This isn’t the first time Democrats have tried to have it both ways– talked out of both sides of their mouth. Remember what they said: Democrats said, ‘Republicans tried to overturn the will of the people on January 6, 2021’ when we objected to 6 states. But on January 6, 2017, they objected to 10 states.”

He noted that the Democrat of the Rules Committee, Rep. Jim McGovern (D-ME), had objected to Alabama in 2017, “a state President Trump won by 30 points”, Jordan said, adding, “The lead impeachment manager (Rep. Jamie Raskin D-MD), objected to Florida and the Chairwoman of the Financial Services Committee (Rep. Maxine Waters (D-CA) objected to Wyoming. Wyoming, for goodness sakes. A State that President Trump won by 40 points. They tried to overturn the will of the people in Wyoming”. Video Below

“We know what this is about: this is about raw politics, and we should all vote no,” the Ohio congressman urged his colleagues.

H.R. 1 allows political campaigns to be funded by federal money, undermines state voter ID laws, and enables ballot harvesting. This is a bad bill, and I oppose it. pic.twitter.com/Nku5ZuphyY

Meanwhile, Rep. Cori Bush (D-MO) offered Amendment 84 to H.R. 1, which would allow “convicted criminals” the opportunity to vote in elections. Bush’s amendment did not pass.

Rep. Marjorie Taylor Greene (R-GA) “called for a roll call vote on this one so that Dems couldn’t ram it through via voice vote” she said.

I called for a roll call vote on this one so that Dems couldn't ram it through via voice vote. pic.twitter.com/1tfB5cYME7

I called for a roll call vote to prevent this radical left-wing legislation from being passed by a simple voice vote. @RepCori Bush’s amendment was soundly defeated in bipartisan fashion. pic.twitter.com/YzXjIBLT6y