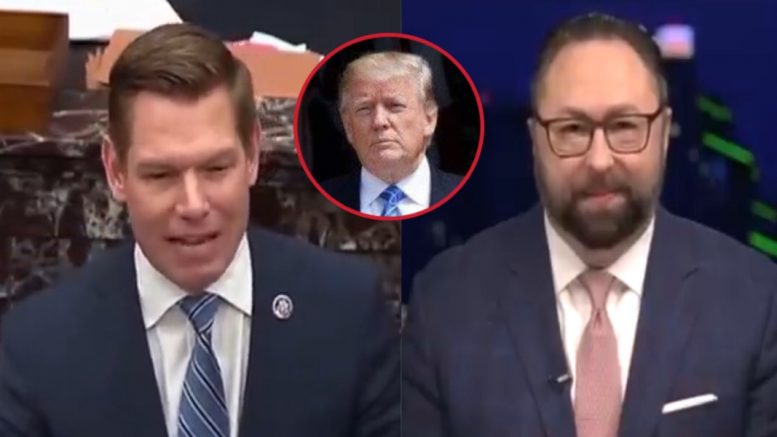 Eric Swalwell filed the suit in federal court in Washington, DC, Friday, claiming that President Trump and the other defendants violated local laws in the nation’s capital by inciting the mob to storm the Capitol as Vice President Mike Pence was in the Senate chamber to certify the 2020 presidential election.

“As a direct and foreseeable consequence of the Defendants’ false and incendiary allegations of fraud and theft, and in direct response to the Defendants’ express calls for violence at the rally, a violent mob attacked the U.S. Capitol,” the suit states.

The Democrat congressman alleges the emotional distress inflicted by the rioters was intentional on the part of Trump and company and said that he had texted his wife, “I love you very much. And our babies” during the Capitol breach.

In addition to suing for compensatory and punitive damages, he’s asking for an order requiring all the defendants to notify Swalwell no less than 7 days before any future large rally is planned in Washington D.C., to give the Congressman time to go to court to prevent more violence, NY Post reported. Continued Below

In a statement, Jason Miller, a senior adviser to former President Trump, blasted Swalwell and reminded Americans how the Democrat congressman was taken advantage of by a Chinese spy known as “Fang Fang.”

“Eric Swalwell is a low-life with no credibility who got caught ‘dating’ the Chinese spy Fang-Fang and makes disgusting bodily noises on national television,” the statement says, referring to Swalwell’s interview in 2019, on MSNBC’s Hardball With Chris Matthews.

“Now, after failing miserably with two impeachment hoaxes, ‘Mr. Fang-Fang’ is doing the bidding of his Chinese masters and attacking our greatest President with yet another witch hunt. It’s a disgrace that a compromised Member of Congress like Swalwell still sits on the House Intelligence Committee,” Miller added. Continued Below

Swalwell was entangled in the Fang Fang scandal after it emerged the Chinese operative — who is believed to have slept with two Midwestern mayors — placed an intern in his office and raised campaign donations for the congressman. Swalwell, who broke ties with Fang Fang after the feds alerted him to her being a Chinese “honeypot,” has not confirmed or denied that he was sleeping with the operative, NY Post reported.

Rep. Mo Brooks in a statement called the suit frivolous and a “meritless ploy.” “I make no apologies whatsoever for fighting for accurate and honest elections,” Brooks said. Trump Jr. and Giuliani did not immediately respond to requests for comment, Washington Post reported.

Last month during an interview on MSNBC Live With Ayman Mohyeldin, Swallwell claimed that President Donald Trump will “spend the rest of his life in civil and criminal courts”.

“A twice impeached president who incited an attack on our Capitol that led to the killing of a cop as … I believe, has no business being at any gathering of any Americans. I think he’s gonna spend the rest of his years in civil and criminal courts,” Swalwell alleged.