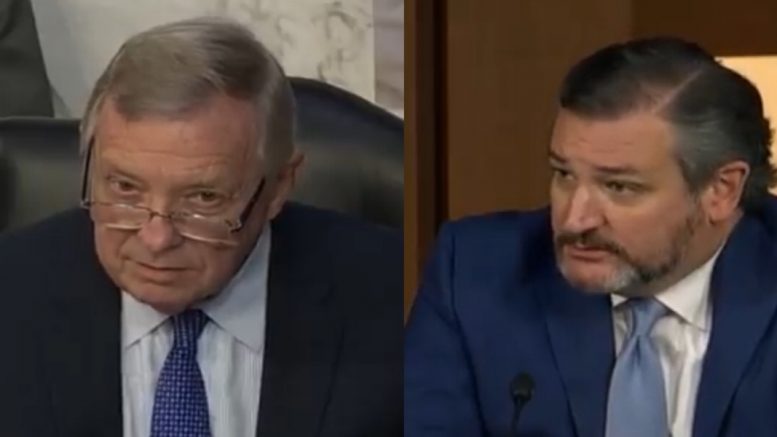 “Cruz had asked, ‘The question for the American people to answer is, should your money, should taxpayer money, be sent, $1,400, to every illegal alien in America?’ Without social security numbers, undocumented immigrants do not qualify for such direct assistance in the first place, nor have they in the past. Durbin said, ‘Undocumented immigrants do not have social security numbers. And they do not qualify for stimulus relief checks, period. And just in case you didn’t notice, they didn’t qualify in December… To stand up there and say the opposite is just to rile people up,'”, per The Daily Beast.

Senator Ted Cruz on Sunday fired backed by responding to the article written by The Daily Beast, Senator Durbin’s statement, and asked Americans to “examine the misinformation here (both deliberate & inadvertent)” and then included 14 facts:

Want to understand why we’re so divided? Why each side seems to live in alternate universes? Take a moment & examine the misinformation here (both deliberate & inadvertent).

FACT 6: Lefty pundits & celebrities like Morgan Fairchild happily repeat the charge that I “lied.” They know none of the facts, but in this politically charged world, the other side must always be wrong. FACT 7: As it so happens, it was Durbin who was lying, and he knew it. Why? FACT 8: There are 12mm or more illegal immigrants. 60% of them are from visa overstays. Many (if not most) of them have social security numbers.

FACT 9: When Durbin said “illegal immigrants don’t have social security numbers,” he was deliberately saying something false, knowing it would be repeated. FACT 10: Under the bill’s language, MILLIONS OF ILLEGAL IMMIGRANTS will get the $1400 checks.

FACT 11: My amendment required that recipients would be “lawfully present,” i.e., legal. FACT 12: When Durbin falsely said ZERO illegal immigrants would get $$, I asked if he would yield for a question. Schumer, sitting next to him, bellowed “no!!”

FACT 13: If Durbin had taken my Q, I would have asked, “if you’re right that no illegal aliens will get $$ under this bill…WHY ARE YOU AND EVERY DEM OPPOSING MY AMENDMENT TO DO JUST THAT?” The answer is that Durbin was lying, and he knew that Lefty partisans would reflexively believe his gals charge that I was the one lying.

FACT 14: When the checks go out, millions of illegal immigrants WILL GET $1400 checks. PREDICTION: the Lefty press & pundits won’t cover it, and won’t care.

“Sadly, that’s why we’re so divided. Facts don’t matter. Journalists don’t care about truth. Everyone is a partisan warrior. And we only believe news from our own side. For America to come together, this must change,” Senator Cruz wrote.

“And on the question of who was telling the truth about the actual facts, it wasn’t Durbin,” Senator Cruz added, including an article from The Daily Wire with a more detailed report over what occurred in the Senate and the amendment brought forward, versus The Daily Beast’s reporting, which contained no sourcing or “fact-checking”.

12/x And on the question of who was telling the truth about the actual facts, it wasn’t Durbin:https://t.co/UtJCi7KJ8G