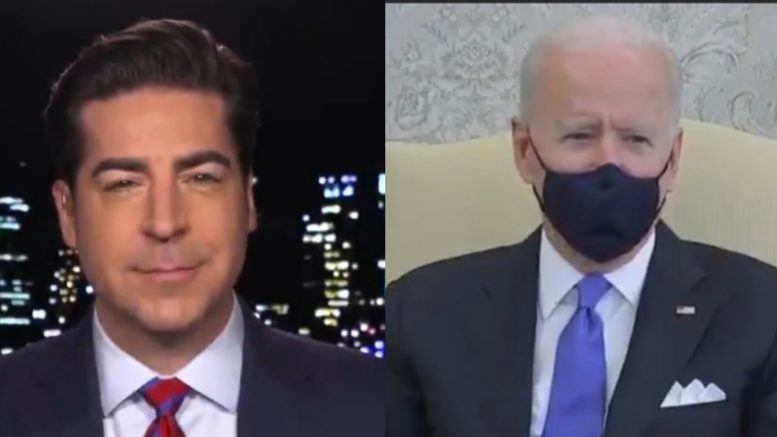 “That just about sums up Biden’s first 50 days, right: color bars…not in command and not answering questions,” Watters said after running a video clip of Joe Biden getting cut off during a White House virtual event after he offered to take questions.

“It’s the opposite of Donald Trump, but that’s what the people wanted allegedly and this is what it looks like. It’s pathetic — charming and relaxing to some, but the incompetence is dangerous,” Jesse declared.

Related Article: McEnany On Why Biden Dodges Talking To The Media: “His Handlers Know That He Can’t Be Trusted With The Microphone”

“Gas prices are up, there’s a crisis at the border, Biden is lobbing missiles in the Mideast and they haven’t even sent out tje stimulus checks yet. That was supposed to be the easy part. Biden’s not even telling us what’s going on. They either won’t let him or he can’t because he doesn’t even know himself,” Watters proclaimed. Video Below

Biden’s not even telling us what’s going on. They either won’t let him or he can’t, because he doesn’t know himself. #Part1 #WattersWords pic.twitter.com/4f2Ka6gzHV