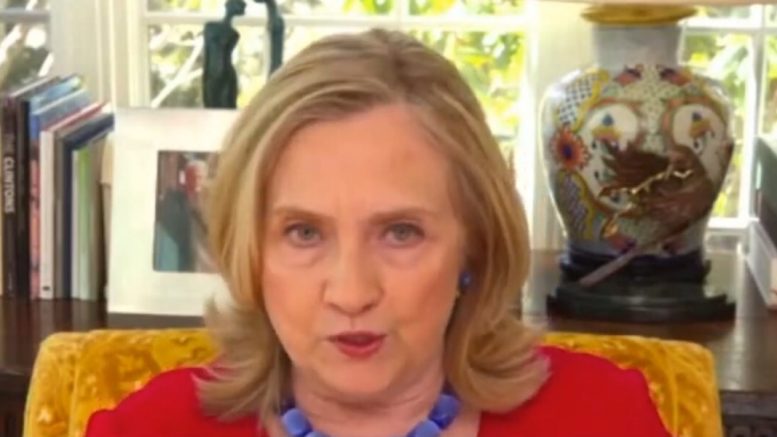 “I don’t want to hurt Liz Cheney, but I will say I was incredibly impressed by her strength in standing up to what had been instigated by Donald Trump and the attack on our Capitol by the then sitting president of our country, which is so outrageous,” Clinton claimed.

The former secretary of state praised Liz Cheney (R-WY) as “one of the very few Republicans in Congress who did stand up” against the 45th President.

“And I give all of them who spoke up, who voted for impeachment, who voted for conviction in the Senate– you know, credit for doing what was right,” Clinton said. “I just wish more Republicans had either the courage –or um– the uh– understanding of what they needed to do that they to stood up and spoken out.”

“Um, right now … it is really troubling to see the Republican Party turn themselves into a cult, and you know, basically pledge allegiance not to the United States of America, but to Donald Trump,” she alleged. “Something I do not understand, I cannot accept. Uh, and I don’t think the majority of Americans as we’ve seen with the very large popular victory of Joe Biden and Kamala Harris. … I don’t understand why the Republican Party is so afraid of itself. Because that’s what it comes down to.”

HILLARY: "It is really troubling to see the Republican Party turn themselves into a cult." pic.twitter.com/a3glYiMi7Z

“I think this will eventually burn out. I hope it happens sooner, not later. The country should not be so much in turmoil and really at the whim of someone who is so indifferent to more than 500,000 deaths from COVID, from White supremacists and nationalists storming our Capitol and everything else that he has either blessed or ignored,” she claimed.