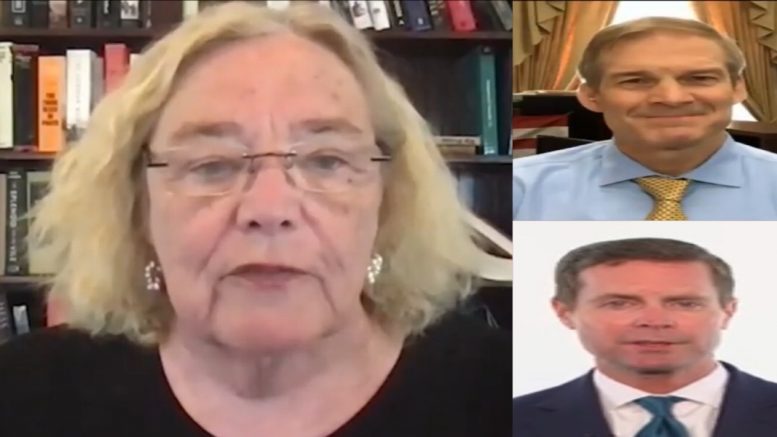 Ranking Member of the House Judiciary Committee Jim Jordan (R-OH) and Ranking Member of the House Administration Committee Rodney Davis (R-IL) sent a letter to Chairwoman Zoe Lofgren (D-CA) to reject cancel culture and to maintain that Fox News and OANN remain available to Members. They also asked Lofgren to make Newsmax available to Members and their staff at the Capitol.

The letter comes in response to Democratic Reps. Anna Eshoo and Jerry McNerney, both from California, who sent letters last month to AT&T, Verizon, Roku, Amazon, Apple, Comcast, Charter, DISH, Cox, Altice and Hulu as well as Google’s parent, Alphabet, about their decisions to carry Fox News, One America News Network, and Newsmax, accusing the conservative outlets of serving as “misinformation rumor mills and conspiracy theory hotbeds that produce content that leads to real harm.”

“This attempt to cancel Fox News, OANN, and Newsmax is not just a radical attack on the First Amendment’s freedom of the press. It also blatantly ignores how left-wing news outlets regularly pushed false narratives about President Trump and the Trump Administration, including debunked allegations of Russian collusion,” Reps. Jordan and Davis wrote.

“The House of Representatives must stand together in rejecting cancel culture and fighting attempts to restrict the freedom of the press,” the lawmakers urged. “… [T]he House Administration Committee can do its part by rejecting any effort to cancel news channels available to Members and staff. The House currently provides Members and staff with access to Fox News and OANN through the Architect of the Capitol and the House Recording Studio, which are both overseen by the House Administration Committee.”

“Even in the face of our sharp disagreements on policy, the House should always promote the free exchange of ideas rather than cancel the ideas with which we disagree. To this end, we ask for your commitment that Fox News and OANN will remain available to Members to staff on the House’s internal television system,” they urged.

“In addition, to demonstrate the House’s commitment to rejecting cancel culture, we ask that you direct the Architect of the Capitol and the House Recording Studio to make Newsmax available to Members and staff as part of the House internal television system. These small steps will go a long way toward demonstrating bipartisan support for fundamental American freedoms and a rejection of the dangerous phenomenon of cancel culture,” Reps. Jordan and Davis added. Continued Below

Rep. Jim Jordan told Newsmax on Tuesday, “I think cancel culture, in the big sense, is the biggest threat to freedom we face. Do you have a functioning First Amendment when only one side is allowed to talk? Do you have free speech when just the left defines what can be said? This is dangerous what we’re seeing with this cancel culture.”

Jordan, however, suspects he will get the same response from Chairwoman Zoe Lofgren as he is getting from Chairman Jerrold Nadler: silence on the matter.

Meanwhile, Lofgren has posted a nearly 2,000-page report documenting social media posts by her Republican colleagues who voted against certifying results of the presidential election on January 6.