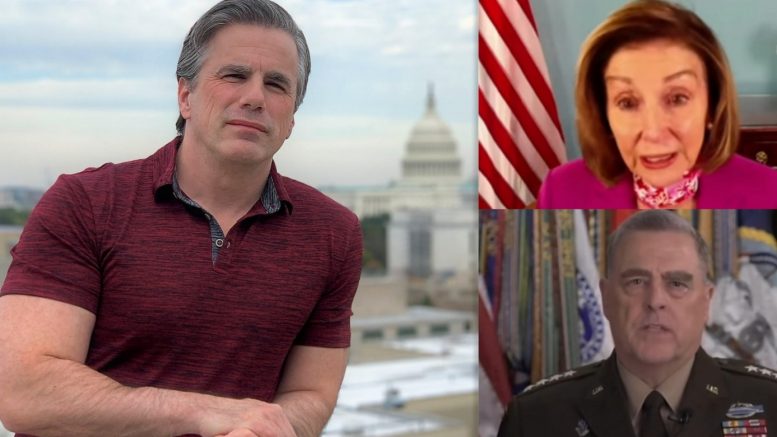 According to a press release from the watchdog group, a Freedom of Information Act (FOIA) lawsuit was filed in the U.S. District Court for the District of Columbia against the U.S. Department of Defense for information surrounding an alleged phone call made between Speaker Pelosi and Chairman Milley on January 8, 2021 that pertained to President Donald Trump.

As stated in the press release:

“Pelosi acknowledged the call in a January 8 letter to her Democratic colleagues. In the letter, Pelosi purportedly related her discussion with Milley earlier that same day: ‘This morning, I spoke to the Chairman of the Joint Chiefs of Staff Mark Milley to discuss available precautions for preventing an unstable president from initiating military hostilities or accessing the launch codes and ordering a nuclear strike. The situation of this unhinged President could not be more dangerous, and we must do everything that we can to protect the American people from his unbalanced assault on our country and our democracy.’

“The lawsuit was filed in the U.S. District Court for the District of Columbia after the Defense Department failed to respond to a January 11, 2021, Freedom of Information (FOIA) request for:

Any and all records regarding, concerning, or related to the telephone call between House Speaker Nancy Pelosi and General Mark Milley on or about January 8, 2021. This request includes, but is not limited to, any and all transcripts, recordings, and/or summaries of the call, as well as any other records produced in preparation for, during, and/or pursuant to the call.

Any and all additional records of communication between Gen. Milley and House Speaker Nancy Pelosi between November 1, 2020 and the present.
In a section of the letter headed ‘Removing the President From Office,’ Pelosi also told her colleagues:

‘As you know, there is growing momentum around the invocation of the 25th Amendment, which would allow the Vice President and a majority of the Cabinet to remove the President for his incitement of insurrection and the danger he still poses. Yesterday, Leader Schumer and I placed a call with Vice President Pence, and we still hope to hear from him as soon as possible with a positive answer as to whether he and the Cabinet will honor their oath to the Constitution and the American people.’“

In regards to the lawsuit, Judicial Watch President Tom Fitton is quoted as saying: “If Speaker Pelosi’s description of her conversation with General Milley is true, it sets a dangerous precedent that could undermine the president’s role as commander in chief and the separation of powers. Our new lawsuit aims to uncover truth about the call.”