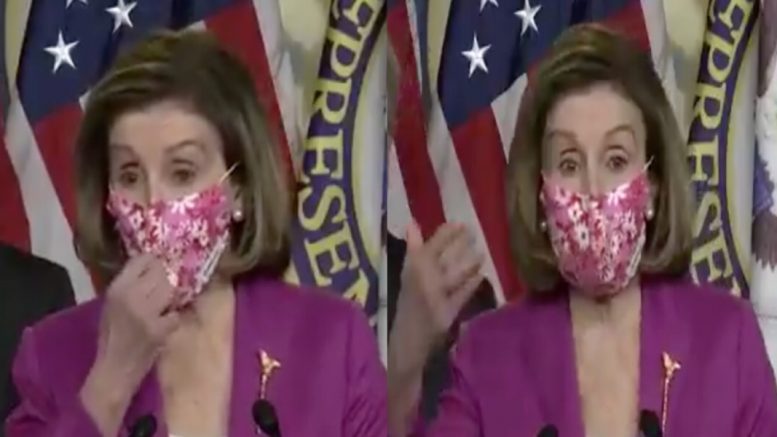 House Speaker Nancy Pelosi (D-CA) on Tuesday was asked by a reporter whether or not there will be another major pandemic relief measure amid House Democrats passing the $1.9 trillion COVID-19 relief package, which Republicans say it’s a pork-stuffed wish list that’s being opportunistically rammed through a Democrat-controlled Congress.

“Do you think this is the last primarily COVID bill that you’ll have to take up?” a reporter asked Pelosi.

“If it stops mutating, if it stops spreading, therefore mutating, then uh, this will be– and some of the provisions in here, uh that have a fuse, like the expanded enhanced …. unemployment insurance benefit that goes until the fall,” she claimed.

“We’ll just see where we are then,” Pelosi said, indicating that COVID could seemingly be used as an tactic to pass more liberal wish list items.

“But it’s not anything anybody can predict. It’s just a question of the science. We will have legislation to address it for as long as it’s there,” she asserted. “What’s interesting about this virus is that it’s resourceful. It mutates. It has variants. And so to us, we– be resourceful and resilient in how we deal with it. But we will be on top of it.” Video Below

Some of the items in the COVID-19 Relief Bill include: $1.5 million bridge connecting New York and Canada; a $100 million underground rail project in Silicon Valley; $480 million for Native American language preservation and maintenance; and $50 million in environmental justice grants.

The House of Representatives Wednesday finalized the massive $1.9 trillion coronavirus relief bill that will head to Joe Biden’s desk to sign.

The vote was 220 to 211 in the House. No Republicans voted “yes” on the legislation.

BREAKING: House Democrats pass a massive $1.9 trillion COVID-19 relief bill with the goal of having it on Pres. Joe Biden’s desk by the end of the week. https://t.co/cJjnq7lhLS