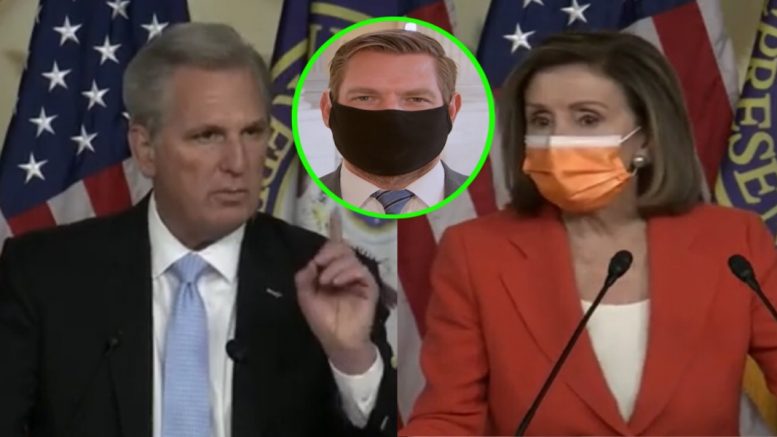 Meanwhile, McCarthy also reacted to news following House Speaker Nancy Pelosi (D-CA) reappointing Rep. Eric Swalwell (D-CA) to the House Intelligence Committee, and reported that he will “offer a resolution to remove him”.

According to a report by Axios that was released in December, Rep. Eric Swalwell, who is a member of the House Intelligence Committee, was targeted by a Chinese national named Fang Fang — aka Christina Fang — an alleged operative for China’s Ministry of State Security, which is the country’s intelligence organization, as reported by The Freedom Times.

When pressed by Politico to comment on the report from Axios, Swalwell said he is convinced that President Trump is behind the timing of the report’s release, and he suspects it was done to hurt him politically in retaliation for his criticism and actions taken against the President, reported The Freedom Times.

“I’ve been a critic of the president. I’ve spoken out against him. I was on both committees that worked to impeach him. The timing feels like that should be looked at,” Swalwell told Politico.

Swalwell added: “What it appears though that this person — as the story reports — was unsuccessful in whatever they were trying to do. But if intelligence officials are trying to weaponize someone’s cooperation, they are essentially seeking to do what this person was not able to do, which is to try and discredit someone.” Continued Below

Rep. McCarthy in December called for Swalwell to be “removed from Congress”, suggesting he is “a national security liability” following the allegations that he was involved with a suspected Chinese spy.

“Remember what Swalwell said: He accused the president of everything that he did by lying to the American public and sitting on the Intel Committee. Not only should he be removed from the intel, he should be removed from Congress as well. … And when did Adam Schiff know and when did the Speaker know? The Speaker appoints the Democrats in that committee,” he told Laura Ingraham in December.

Both McCarthy and Pelosi received a briefing in December from the FBI in regards to Swalwell’s relationship with an alleged Chinese spy. Continued Below

Despite, the allegations of Swalwell’s relationship with an alleged Chinese spy, Fang Fang — aka Christina Fang, the California congressman was appointed by Pelosi as an impeachment manager during impeachment 2.0 against former President Trump.

McCarthy took to Twitter, announcing, “Pelosi just reappointed Eric Swalwell to the Intelligence Committee. Based on the briefing she and I received together, Swalwell should not be on the panel in charge of guarding our nation’s secrets. Next week, I will offer a resolution to remove him from the Intel Committee.”

House Speaker Nancy Pelosi previously said she didn’t have “any concern” about Swalwell’s ability to serve on the Intelligence Committee.

Pelosi just reappointed Eric Swalwell to the Intelligence Committee. Based on the briefing she and I received together, Swalwell should not be on the panel in charge of guarding our nation's secrets.

Next week, I will offer a resolution to remove him from the Intel Committee.

They join the first line of defense for our country against threats & foreign adversaries, including the Chinese Communist Party. https://t.co/oncwXXFnIK