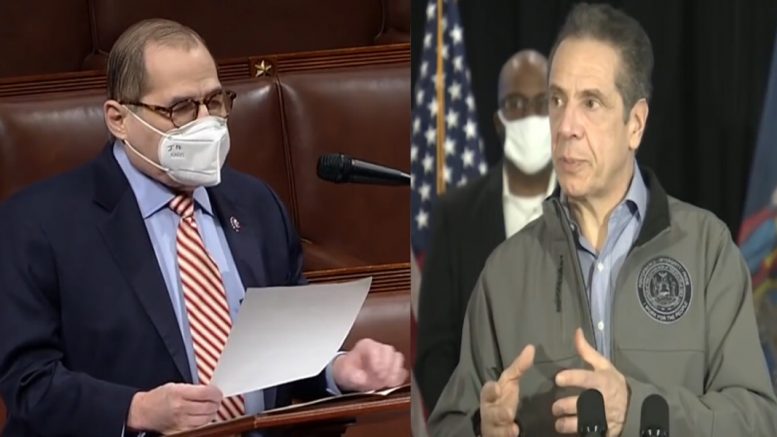 Cuomo has denied the accusation, saying on Wednesday: “I have never done anything like this.”

Read my statement calling for the resignation of Governor Andrew Cuomo. pic.twitter.com/JyZntu9HJS

“This week, the second sexual assault allegation and the sixth harassment allegation was leveled against Governor Cuomo,” they said in a statement. “The fact that this latest report was so recent is alarming, and it raises concerns about the present safety and well-being of the administration’s staff. These allegations have all been consistent and highly-detailed, and there are also credible media reports substantiating their accounts.”

After two accounts of sexual assault, four accounts of harassment, the Attorney General’s investigation finding the Governor’s admin hid nursing home data from the legislature & public, we agree with the 55+ members of the New York State legislature that the Governor must resign. pic.twitter.com/jV5dwtuVPr

The lawmakers spoke after the Albany Times Union reported that a woman said Cuomo aggressively groped her at the executive mansion after summoning her there to help him with a cellphone issue. Cuomo is alleged to have reached under her blouse, according to the paper.

In recent weeks, that scandal has been eclipsed by the onslaught of claims of harassment and outright assault. The state AG, Letitia James, is investigating the allegations that range from accusations of inappropriate remarks and questioning to unwanted advances and groping.

Last month, Cuomo apologized for interactions that he said “may have been insensitive or too personal and that some of my comments, given my position, made others feel in ways I never intended.” However, he denied inappropriately touching anyone.

In addition to Ocasio-Cortez, Bowman and Nadler, Reps. Nydia Velazquez, Grace Meng, Sean Patrick Maloney and Carolyn Maloney, also called for him to step down. Video Below

Meanwhile, Mayor Bill de Blasio repeated his call that Cuomo step down on Friday. “The governor must resign. He can no longer do the job,” he said, before urging him to “do something that’s decent after these many many indecent revelations and simply resign.”

Their statements come a day after the New York State Assembly on Thursday initiated what’s seen as the first step to impeaching the governor when they opened an investigation with full subpoena power.