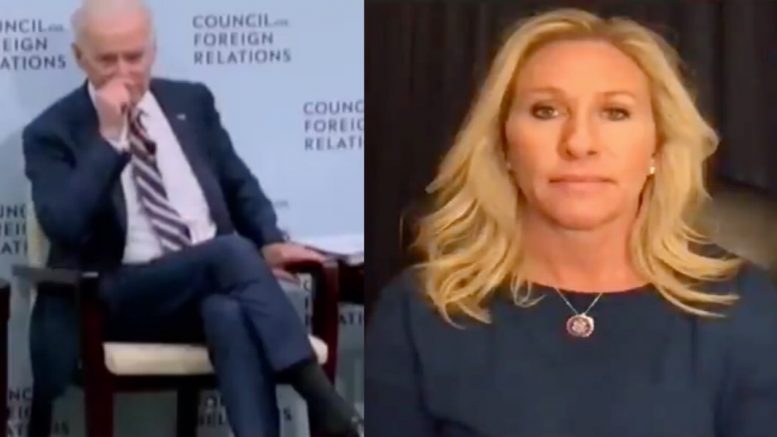 Rep. Marjorie Taylor Greene (R-GA) told host David Brody that Joe Biden should be impeached for “abuse of power” and that “he’s a danger to America” during a Wednesday interview on “The Water Cooler”.

Brody pressed Rep. Greene about her hashtag “#ImpeachBiden” on Twitter, asking the Georgia congresswoman to clarify the message she is “trying to send” specifically.

“I introduced Articles of Impeachment on Joe Biden early on when I entered Congress back in January,” Rep. Greene said. “The reason why I did so is because Joe Biden is on record for abusing his office and abusing the positions he holds, which are very powerful. It’s an abuse of power”.

On January 21, 2021, Rep. Greene filed Articles of Impeachment against Joe Biden “for abuse of power” and made the formal announcement on Twitter, in a press release, and also during an interview on Newsmax.

“We know that he’s done these things. He withheld money from Ukraine. He’s on record saying that on video, admitting himself, just to get a certain prosecutor fired that was coming after his son, Hunter. Joe Biden, Hunter Biden, and his brother James Biden– we all know that they had plans and may still have big plans with business in China having to do with energy companies,” Rep. Greene explained.

“While at the same time, while Biden’s policies kill American oil and coal energy companies, but they’d rather make money on the side over foreign countries energy companies. Joe Biden is on record for abusing his power, just to get his family rich and also enrich himself,” she said. Continued Below

Rep. Greene also expressed, “He’s a danger to America. We should also Joe Biden for the danger to America that he is causing at the southern border. He is rapidly, rapidly inviting thousands and tens of thousands to enter our country, and he is doing nothing but helping the coyotes and cartels get rich every single day on this process.”

Former President Donald Trump on Tuesday told host Maria Bartiromo on Fox News that the situation at the southern border is “going to get much, much worse” if the Biden administration does not get a handle on the current “crisis” at hand.