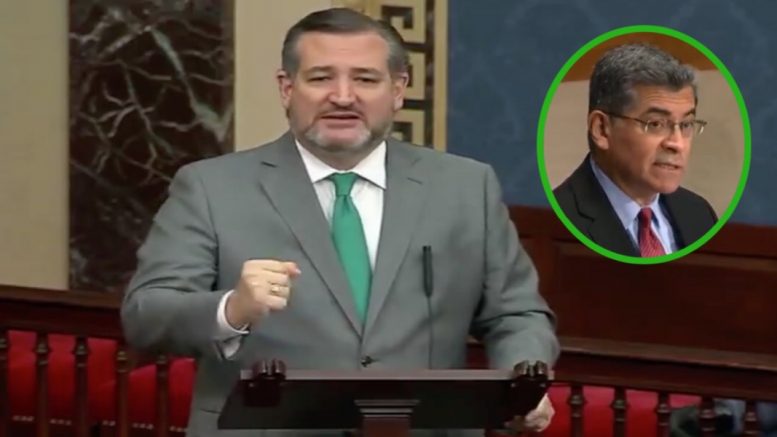 Cruz encouraged Joe Biden to nominate someone qualified to lead HHS and the United States’ pandemic response, as the Texas Senator believes that Becerra “has no healthcare experience whatsoever”, is “woefully unqualified”, and he made the case for why Becerra ” is the single worst cabinet nominee put forward by Joe Biden”.

“I rise to oppose the nomination of Xavier Becerra, Secretary of Health and Human Services. There are unfortunately numerous nominees in the Biden administration who are either extreme or unqualified for the positions for which they have been nominated,” Senator Ted Cruz said.

“But of all of those nominees, I believe Mr. Becerra is the single worst cabinet nominee put forward by Joe Biden to serve in the cabinet,” the Texas Senator declared.

“President Biden has told has told this country repeatedly that his top priority is defeating the COVID-19 pandemic. The Department of Health and Human Services is on the front line fighting COVID-19. Mr. Becerra by any measure, is woefully unqualified to lead that department,” he expressed.

“The Department of HHS is in the process of administering hundreds of millions of vaccines. Mr. Becerra has never so much as distributed french fries at a McDonald’s. Mr. Becerra’s only qualifications and indeed, the qualification that earned him this nomination– is he is a radical, leftwing trial attorney,” the Texas Senator pointed out.

“If a Republican president had done that, all of the Democrats would have been lined up here thundering, ‘This is a president that doesn’t care about science!’ You would’ve heard Democrats telling us, ‘This is a president for who defeating COVID-19 is not a priority, is not serious. … This is president … who puts partisan priorities above defeating the public health menace of COVID-19,'” Senator Cruz predicted. Video Below

“This is a president who is more concerned about appeasing his radical base than he is about protecting the public health and safety of Americans,” he added.