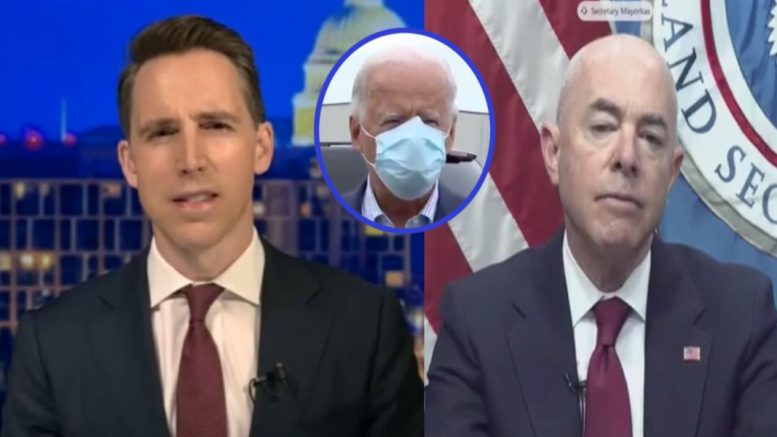 Senator Josh Hawley (R-MO) on Wednesday spoke to host Tucker Carlson on Fox News over the surge of illegal migrants and unaccompanied children coming to the U.S. southern border during the coronavirus pandemic.

“One of the first things you gotta make clear is that you can’t come to this country and get welfare benefits and all manner of other handouts from the federal government, but the Biden administration has done the reverse. They have eliminated the rules that said you had to show that you had to be independent financially, economically independent, before you could come into the country,” the Missouri Senator said.

On Tuesday, Senator Hawley sent a letter to Secretary of Homeland Security Alejandro Mayorkas urging him to reverse course and enforce the public charge rule, an immigration law which bars illegal immigrants deemed reliant on welfare from entering the country and extending visas.

In the middle of a pandemic & border crisis, President Biden opens the border to non-citizens dependent on welfare. Bad for American workers, bad for the border https://t.co/QCbnU9DJr3

Mr. Carlson responded, wondering, “And [they’ve] done it without the consent of the govern[ment]. I mean, none of this has been voted on in the Congress. This is all being done through the agencies effectively by executive order. So it’s not Democratic even. But then to exempt people that are breaking our laws from the onerous coronavirus regulations the rest of us have been crushed by, what message are they sending to us?” Video Below

Senator Hawley replied, “The message they’re sending is just lawlessness and it’s one standard for American citizens and a different standard for people coming in illegally into the country.”

“It is a major public health disaster, and they’ve created … a humanitarian disaster at the border. But also this, Tucker: These cartels, let’s remember, nobody sets foot across that border on the southern end of it without the cartels. The cartels control that border,” he said.

“So what Joe Biden has effectively done is empower those cartels to make money, empower them to smuggle children, empower them to run drugs. They are now in full control of border policy because the U.S. president is letting them be,” Mr. Hawley added. “… This is a national security threat, it is a humanitarian crisis at the border, and it’s time that President Biden admit that his policies have caused it. And it’s time for him to do something about it.”