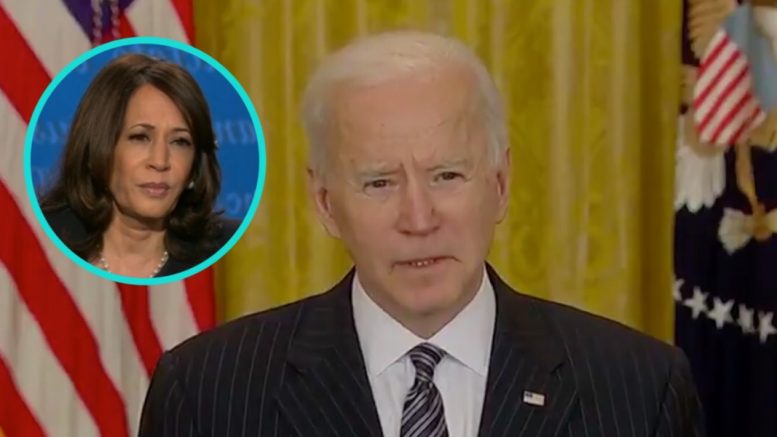 While delivering remarks at the White House East Room on Thursday over the state of coronavirus vaccinations, which are made possible because of Operation Warp Speed under the Trump administration, Joe Biden incorrectly referred to Vice President Kamala Harris as “President Harris” without correcting himself.

Biden claimed, “The hardest hit and suffered the most, especially Black, Latino, Native American, and rural communities” regarding COVID-19. “This is really important, because we believe in speed and efficiency must be matched with fairness and equity”.

“Now, when President Harris and I took a virtual tour of a vaccination center in Arizona not long ago, one of the nurses on that, on that tour– injecting people, giving vaccinations, said that each shot was like administering a dose of hope,” Joe Biden said in part.

This is at least the second time the 78-year-old Joe Biden has mistakenly referred to his vice president as the commander in chief. Biden called Harris the “president-elect” before he assumed the Oval Office in December.

“I hope the president will clearly and unambiguously urge all Americans to take the vaccine once it’s available,” Biden said at the time. “I took it to instill public confidence in the vaccine. President-elect Harris took hers today for the same reason.”

While speaking in Tampa, Florida in September, then-Democratic presidential nominee Joe Biden appeared to suggest that his running mate was at the top of the Democratic presidential ticket by saying that a “Harris-Biden administration is going to relaunch that effort…”, when discussing a jobs program for veterans. Continued Below

Some users on Twitter responded to Joe Biden’s apparent gaffe after he referred to Kamala Harris as “President Harris”. We leave you with a few of those reactions:

Not necessarily breaking news for those who pay attention.

He really is clueless.

I say, Joe Biden is a total freaking embarrassment to this country.

Another dark address from Biden.

And once again he referred to VP Harris as “President Harris”.

What the actual f*ck is going on here??

Hey, @JoeBiden, YOU are @POTUS not @KamalaHarris.

No legitimate president, in a million years, would ever refer to his VP as “president,” and that’s why Biden just called Kamala “President Harris.”