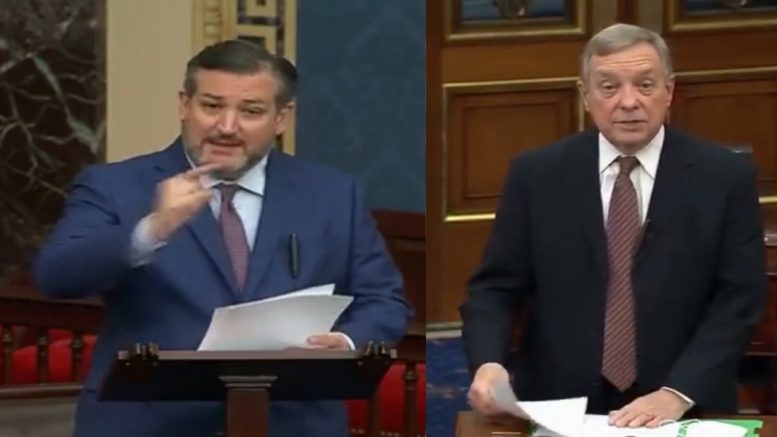 Senator Ted Cruz (R-TX) had proposed an amendment to the American Rescue Plan that would have stopped illegal immigrants from receiving access to the $1,400 stimulus checks. His amendment, however, was voted down after Senator Dick Durbin (D-IL) criticized Cruz for trying to “rile people up over something that is not true.”

On Thursday, Senator Ted Cruz demanded that Senator Durbin apologize for essentially calling him a liar after he presented evidence from at least one article written by Newsweek, which ultimately factchecked Durbin’s false claims.

“As my colleagues know, and as several fact-checkers confirmed over the past week, the Democrats’ partisan reconciliation bill that became law last week, will provide many illegal aliens with 1,400 dollar rebate checks paid for by the American taxpayer,” Mr. Cruz said. “By several estimates, millions of illegal immigrants will get these rebates”.

“I offered an amendment two weeks ago to the Democrats’ bill to close this loophole. During debate on my amendment, one Democratic senator spoke against my amendment, saying that ‘no illegal aliens have social security numbers and therefore the premise of my amendment and my speech was– he said, ‘Not true'”, Senator Cruz continued.

He added, “In fact, here are the senator’s full remarks from the floor two weeks ago”, then proceed to read Mr. Durbin’s remarks:

Mr. President, the statement from the Senator from Texas is just plain false. Let me clear, undocumented immigrants do not have social security numbers, and they do not qualify for stimulus relief checks, period. And just in case you didn’t notice, they didn’t qualify in December when 92 of us voted for that measure, and they don’t qualify under the American Rescue Plan. Nothing has changed. And for you to stand up there and say the opposite is just to rile people up over something that is not true. It is not true. We know what’s going on here. They want to be able to give speeches to say the checks go to.

Cruz went on to say that Durbin “took to Twitter to double down”, in which Durbin had tweeted, “Senator Cruz’s claim is only meant to rile people up over something that is not true. You cannot receive a stimulus check without a social security number. That’s a fact,” adding, “We simply cannot stand by and allow outright false hoods to be propagated on the Senate floor. It’s time for GOP senators like Ted Cruz to stop trying to rile people up over misinformation.” Continued Below

The Texas senator announced: “It turns out the comments from the Democratic Senator were categorically false. And my comments that this bill would send checks to millions of illegal aliens were categorically true. Numerous factcheckers began looking at the claims.”

“Newsweek initially factchecked it … took the word of the Democrats– and concluded my statement was ‘mostly false’. Following that, my staff got on the phone with Newsweek and presented them with incontrovertible facts. Incontrovertible facts of the roughly 12 million estimated illegal aliens who are here, roughly 60% of them are visa overstays, people who came legally and then overstay their visa,” he said.

“And a significant percentage of visa overstays, have social security numbers and will receive will checks,” Senator Cruz explained. “… When Newsweek heard these facts, they did something really quite impressive, admirable. They admitted they were wrong. They revised their factcheck. And they changed their factcheck from ‘mostly false’ to true. … I want to commend Newsweek for demonstrating journalist integrity.” Continued Below

“It is clear and it is indisputable that a significant number of illegal immigrants will receive checks and are receiving checks right now. All one hundred members of this body were misinformed by the Democratic senator– that no illegal aliens would receive stimulus checks,” Senator Cruz said.

“I want to give my colleagues a chance to adopt the amendment now with the correct information, with the true information, with the factual information. …I am not here suggesting that when [Durbin] stood up and spoke on the senate floor and said things that were absolutely false that he did so knowingly and maliciously,” he continued.

“… But the facts are now clear. … I hope my friend from Illinois will show the same principle Newsweek showed– to apologize– to say he was wrong, and say he’s sorry for calling me a liar on the Senate floor and then, going to Twitter to do so twice,” the Texas Senator recommended. Video Below

“That would be the right thing to do, to acknowledge an error when it occurred,” Mr. Cruz suggested of his Democratic colleague.

Newsweek’s article can be read HERE.