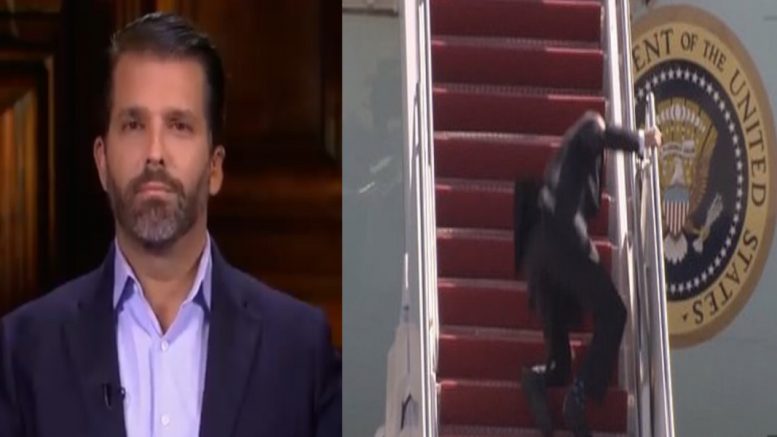 78-year-old Joe Biden repeatedly fell as he climbed up the steps of Air Force One on Friday, while he attempted to board the aircraft at Joint Base Andrews for a flight to Atlanta, Georgia.

Biden gripped on to the railing, steadied himself and kept going but lost his footing a second time and then a third. On the third trip, he fell to his knees. He got back up then carried on up the stairs before giving a salute at the top then disappearing into the aircraft, Daily Mail reported.

Joe Biden falling three times Friday comes a day after he referred to Vice President Kamala Harris as “President Harris” during a speech at the White House.

Joe Biden just fell 3 times in a row trying to go up the stairs to Air Force One pic.twitter.com/gTUTckUH32

Donald Trump Jr. reacted on Twitter Friday to Biden stumbling on the stairs to Air Force One, writing, “I remember the press bashing Trump for touching the rail once. Biden falls repeatedly but I’m sure he’s the picture of health.”

“No wonder all our enemies are pouncing simultaneously and mocking him publicly,” he said.

I remember the press bashing Trump for touching the rail once. Biden falls repeatedly but I’m sure he’s the picture of health. No wonder all our enemies are pouncing simultaneously and mocking him publicly. pic.twitter.com/R1qN9DDHFW

Trump Jr. is likely referring to events that have unfolded this week as world leaders publicly mocked the 78- year-old Biden.

Earlier this week, Biden engaged in a bitter stand-off with Russian President Vladimir Putin, which ended with Putin wishing him ‘good health’ after Mr. Biden called Putin “a killer”, during a recent interview with ABC’s George Stephanopoulos.

The Biden administration struggled during its first face-to-face meeting with communist China this week, which happened on U.S. soil, as the Chinese turned what was supposed to be an affair only lasting several minutes into a “public blowup” that lasted more than an hour, Daily Wire reported.

Last summer in June, the leftwing media had a field day when the 45th President slowly walked down a ramp at West Point after congratulating cadets and shaking every hand.

The hashtags “TrumpIsUnwell” and “TRUMPstroke” were trending on Twitter at the time of the video clip circulating on social media. Even Biden himself mocked President Trump.

Flashback to when Biden mocked Trump: "Watch how I run up ramps and he stumbles down ramps."

Yeah we watched how you ran up that ramp alrightpic.twitter.com/44XQIITql3

(Related: WATCH: Joe Biden Stumbles While Walking Up The Stairs To Air Force One)