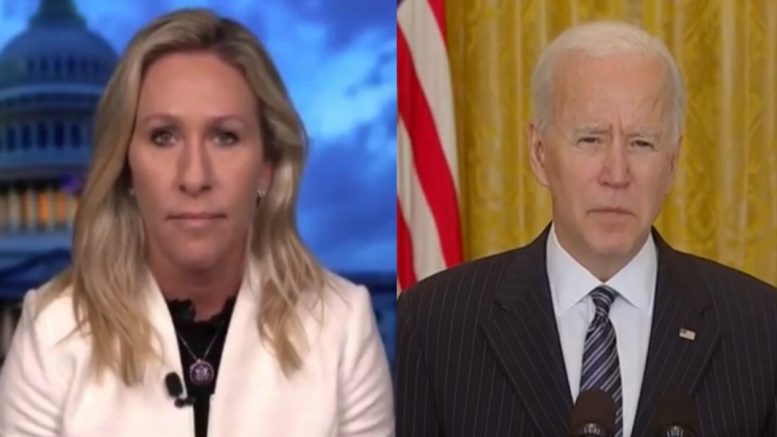 Last week, Rep. Marjorie Taylor Greene (R-GA) introduced legislation to secure the U.S. southern border amid the dramatic surge of unaccompanied minor children and illegal aliens, which is causing a border crisis in the first months of the Biden administration.

Rep. Greene’s bill called the “Protect America First Act” would “end Joe Biden’s crisis at the Southern border by halting all immigration for four years, funding and building the wall, expediting the deportation of illegal aliens, rescinding DACA and DAPA, and other measures protecting our national sovereignty”, according to the Georgia congresswoman.

During an interview Friday on Newsmax with host Chris Salcedo, Rep. Marjorie Taylor Greene expressed that she is “so proud to have introduced the strongest border security that’s ever been introduced”.

“This fully brings together all of the important things that we have to do as a nation to protect our country,” she said.

Rep. Greene explained that the “Protect America First Act” will “fully fund the border wall, to finish building it at 22 billion dollars”, adding that it is “the amount President Trump asked the Republican-controlled Congress and Senate for back in 2017 and he never got”.

“This bill also puts a 4 year moratorium on immigration– that would be during President Biden’s entire first term. We know President Biden has ripped our borders open, and now we have 1000’s of people pouring across our border, coming into our country, and the Biden administration is going to use all of our tax dollars to give aid and comfort to these people that don’t belong here,” she said. Continued Below

Rep. Greene said that “legal immigration is a wonderful thing here in America, and we greatly value that”, but she noted, “We do not want to be illegally invaded, and that’s what’s happening right now”.

“President Biden invited them all to come. He’s created a terrible human crisis at our border,” she asserted, likely referring to at least one example where Joe Biden said, in part, during a Democratic debate last year regarding illegal aliens, “I would, in fact, make sure that there is– we immediately surge the border.”

The federal government currently has more than 14,000 migrant children in its custody, administration officials said on Thursday, even as they insist that what is happening on the southern border does not constitute a “crisis.” US Customs and Border Protection is on pace to encounter more individuals on the border than in the last 20 years, Homeland Security Secretary Alejandro Mayorkas said Tuesday, CNN reported Thursday. Video Below

(Related: Reporter To Joe Biden: “Do You Have Any Plans To Travel To The Southern Border?”)